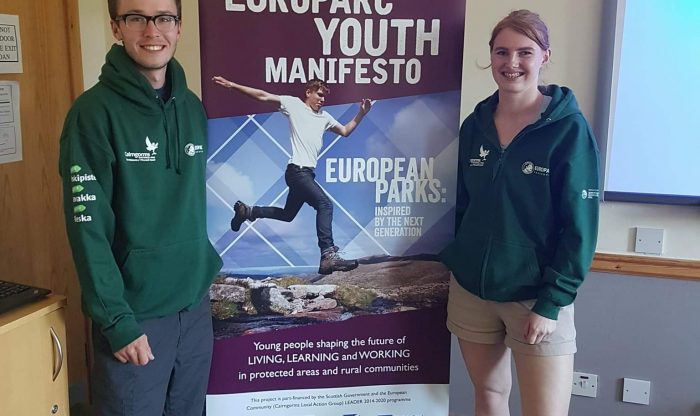 During 2018 fifty young people from across Europe met together in workshops to create a EUROPARC Youth Manifesto that would ask organisations and communities to engage with their young people.  The manifesto is a source of ideas and inspiration for decision makers in protected areas and rural communities to ensure the involvement and empowerment of young people, with the aim to create a vibrant future for them, for nature, and for our rural areas.  The Manifesto was launched to over 600 delegates at the EUROPARC conference in Aviemore in September 2018.

Katy Foxford is the Tourism Support Officer at the Yorkshire Dales National Park Authority (YDNPA) she was involved in the creation of the Manifesto and took it back to Yorkshire to see how it could apply there.  Here is her case study of their journey so far.

The Youth Manifesto is particularly pertinent to the Yorkshire Dales as the area is in crisis with regard to retaining and attracting young people.  Almost 60% of the total Dales population are aged 45 and over; this compares with only around 40% nationally. Young people are leaving our rural areas in large numbers, and older, retired people are moving in. The YDNPA recognised that the Youth Manifesto could play an important role in tackling this problem and since has been working to create awareness of the Youth Manifesto and has taken action to incorporate elements of it into its work.

Firstly we looked at how we could apply the Youth Manifesto to the work of the Park Authority and the actions of the National Park Management Plan. The 27 action areas of the Manifesto were scrutinised and department heads were asked to consider how they might apply the Manifesto to their particular area of work.  We then presented a paper at the National Park Authority Meeting and asked Park Authority members to vote; they voted unanimously to adopt the EUROPARC Youth Manifesto and to give detailed consideration to the 27 actions in it.  I also personally worked hard to create awareness of the Manifesto through presentations to staff, at national conferences and international seminars and created blogs to help to maintain a high profile for the Manifesto.

Once the Manifesto had been adopted we set up an internal Youth Forum for apprentices and under 30’s in the Authority. The aim was to create a space for our younger people to meet up, have fun, learn a new skill, find out about a different department and explore different areas of the National Park. The Forum also broadened the experience of our apprentices, ensuring transferable skills were gained in different areas, so that they would be in a better position for a job once the apprenticeship came to an end.

Making positive change for young people and engaging them in consultation processes is important,  the action areas of the Youth Manifesto encourage organisations to give young people a voice and a chance to make decisions. The YDNPA has created videos targeting young people to get their views on the issues surrounding the National Park, from climate change to employment to the future sustainability of the Park, encouraging them to have their say and get involved with the consultation.

Prior to the Youth Manifesto the Authority had launched an ‘Attracting Young People’ initiative in conjunction with district councils.  This included a range of practical steps to try to reverse the trend of young people and families migrating away from the rural areas; the Youth Manifesto now feeds into this initiative.  There are five partners currently involved in the initiative and each partner authority leads on specific actions; including measures to build more affordable housing, improve digital communications, create better jobs, retain and strengthen local services and promote the area as a place to live.

The YDNPA commissioned a Social, Economic and Housing Study of the Park, which showed the need for affordable housing but also the need to create more one and two bed accommodation, which suits not only the younger generation but also the older generation who may want to downsize.

The Lakes and Dales region has 44% fewer 16-34-year olds than the national average, which raises significant concerns regarding its future economic and community resilience. The ‘Great Place: Lakes and Dales’ project aims to tackle this problem with various initiatives including the launch of a flexible housing design competition.  This competition was designed to attract architects from around the world with an innovative approach to flexible housing, which might appeal to young people and draw them to the area.

As well as the housing problem there is a lack of awareness about opportunities available to young people in rural areas, which is why it is imperative to involve young people from an early age and help them to feel a valued part of the community.  It is important to get messages into schools about the various opportunities for young people to work in the countryside and be involved in conservation.

The Great Place: Lakes and Dales project has created videos of young people who work for the Park Authority speaking about their work. These videos are designed for use by schools and at careers fairs with the aim of making these ‘hidden jobs’ more visible as they may not be well advertised or seen to be an option. The Authority also caters for work placements, internships, externships and apprenticeships – the latter being how I first became employed at the Yorkshire Dales National Park.

I believe organisations have to be open and proactive to involving young people in the work that they do. Funding is limited and ultimately some measures will depend on influencing and gaining the support of local and national government bodies, but it can be about making small changes, learning from others and being creative.

There are many things that can be done to encourage the retention of young people living in the countryside and to attract more young people to move here. These might include job creation strategies and programmes, education, skills development and technical training, youth involvement in the community and financial incentives to live and work in the area – but these all come with their own challenges.

It is important to look at what is already being achieved locally in the area and just select one aspect where a difference might be made – such as making places easier to get to and creating spaces for young people to connect. A starting point might be to involve young people in decision making for particular projects.

It is a good idea to seek out young people and find those who want to talk about local issues, reaching out is the first step. Think about how you might identify those young people maybe through youth bodies already in place, such as youth forums and councils. Use social media to target younger demographics and create campaigns to promote a clear programme of opportunities. Start a dialogue  and ask questions: why are you here, what could be better, how can you be involved?

We are still early in our journey in the Yorkshire Dales but there is so much more that we hope to achieve going forward.  The Youth Manifesto is a really useful tool to help bring about change for young people in rural areas and it can work for any organisation that is serious about the future of its young people.