The Cairngorms National Park is renowned for its amazing scenery and spectacular views. From beautiful lochs to mountain tops and historical castles along the way, there is plenty to stop and see as you travel around the Park by foot, bike or car 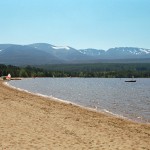 Loch Morlich is an ice age feature known as a kettle hole. The beach in the mountains sits at the foot of Cairngorm with views of the still snow- capped mountains. Known for being ‘Loch of the Island’, Loch an Eilein, with its 13th century island castle this is a truly unique place to visit. The very picturesque Loch Muick sits at the far end of Glen Muick and is accessible from Ballater. 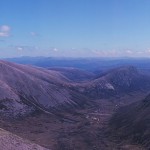 Ben Macdui is Britain’s second highest summit at 1,309 metres, and lies at the southern edge of the CairnGorm plateau right at the heart of the Park. The 360-degree stunning view is well worth the effort of getting to the top. The Arctic characteristics of the Cairn Gorm plateau with its late lying snow patches make for stunning views all year round. On the lower slopes, there are large tracts of mature Caledonian pine, a remnant of the once vast woodland which covered much of central Scotland. Meall a’ Bhuachaille is a great choice for a first hillwalk in the Cairngorms. It is easily accessible and has the benefit of great paths as well as superb 360 degree views from the top. 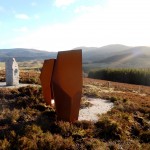 A great scenic spot is on the scenic route (snow road) from Blairgowrie to Grantown-on-Spey. Here you can admire the view to Corgarff castle from the watchers and moment in time art installations. The route from Braemar follows Glen Lui and gives open views to the imposing Derry lodge and Linn of Dee which is situated in a beautiful pinewood with great views of the Cairngorms. The single arched rubble-built Gairnshiel Bridge is a great spot to feel like you have stepped into the past! The short steep and narrow bridge crosses the River Gairn was originally formed as part of the network of military roads in this region. Balmoral Castle has been the Scottish home of the Royal Family since it was purchased for Queen Victoria by Prince Albert in 1852. The Castle is a great example of Scots Baronial architecture and is classified by Historic Scotland as a category A listed building.