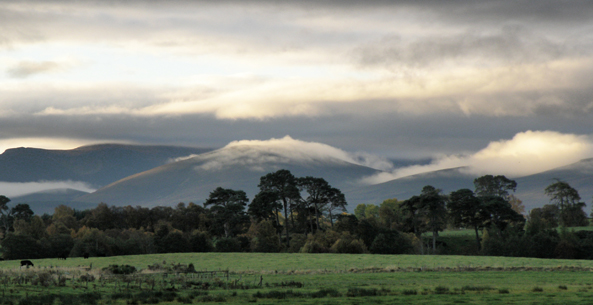 As our plane touched down at Nairobi airport I began to believe that a long held dream of mine was at last coming true.  For some of us of a certain age the word Serengeti conjures up memories of Armand and Michaela Denis.  During the 1950s and 1960s they were familiar faces on our TV screens regularly broadcasting their Friday evening programme On Safari from Kenya.  At an impressionable age as I was then, they must have had a profound effect, for since then I’ve often dreamt of going on an East African safari.

We motored on into Tanzania and there explored the Ngorongoro crater, a vast plain spanning 8,300 square kilometres, almost twice the area of the Cairngorms National Park, and completely enclosed within the high walls of a volcanic caldera, teeming with all the classic wildlife of Africa.  Ngorongoro is designated as a Conservation Area and is managed by a Conservation Area Authority charged with protecting wildlife, landscapes, forests and people and their livestock.  Unlike the wider Serengeti National Park people are allowed to live in these conservation areas provided their way of life “does not damage the other natural resources of the area”.  There are many Massai tribespeople living around the area, still following their traditional semi-nomadic lifestyle as they move their herds from settlement to settlement.  The remnants of the celebrated annual migration are stranded here as it passes through the crater.  Thousands of wildebeest and zebras provide a ready meal for the lions, cheetahs and hyenas which stalk the plain side by side with grazing elephant, buffalo and the elusive black rhinoceros.

Later we flew on to the Northern Serengeti National Park with its rivers teeming with hippopotamus and crocodiles.  One morning we came across a giraffe in the final stages of giving birth.  This contrasted sharply with the previous day when we had seen two hyenas bring down a young wildebeest and tear it apart in front of our very eyes leaving behind a meal for the circling vultures and the waiting jackals.  This is a very special place.

National parks are special places, but they’re not special because they’re national parks.  They are national parks because they are special and they need to be protected and well managed.  Having national park status is simply a signpost for the rest of the world.  It points to a place with outstanding natural and cultural qualities and a place where you will have a wonderful experience.  It’s a place to be valued and looked after.  It doesn’t matter if the signpost says Serengeti or Yosemite or Cairngorms the message should be the same and the guarantee to the visitor should be the same.  Each will have its own characteristics, its own culture and its own flora and fauna but in each one you will have an unforgettable adventure.

We had a wonderful few days in Ngorongoro and in the Serengeti.  It went well beyond the dream I had cherished all these years – unbelievable wildlife, fantastic scenery, outstanding accommodation and efficient services.  Everywhere we encountered smiling faces, people who took a pride in their environment and who were anxious to show it off and ensure that we had the experience of a lifetime.

I do hope visitors to the Cairngorms leave with the same feelings.