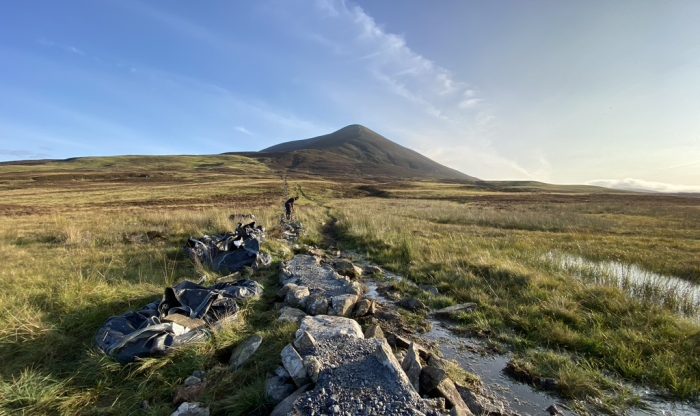 Our rural workforce theme for August features some of the Cairngorms National Park’s rural land-based workers who look after the natural environment and help us to enjoy access to the great outdoors.

Ten years ago, Julian Digby was telecoms engineer in Dublin and saw an advert for a footpath construction skills training course being run by the Cairngorms Outdoor Access Trust (now OATS), in the Cairngorms National Park. He applied and soon after moved to Scotland to take up his new role. Today, Julian is owner and director at Cairngorm Wilderness Contracts Ltd. Here he tells us about his initial training and how it led to his role as an integral member of the Park’s rural workforce, and the critical conservation he and his company does.

In March 2011 I started the footpath construction skills training course and throughout, I worked very closely with Stuart Taggart. Because we both lived in Inverness at the time, we shared a car and got to know each other well. Pretty quickly I realised that this work was what I wanted to do but felt we could do a much better job than some of the previous work that had been carried out and so the idea formed to start our own company with our own vision, un-restrained by other organisations’ ideas and ways of operating.

Alan Wright who was also on the course was quickly on board and his business knowledge allowed us to form our company, Cairngorm Wilderness Contracts Ltd.

The original vision was to have an outdoor conservation company whose focus would be the hand building of upland footpaths, but would also encompass other areas of conservation works, and to this end one of the earlier contracts was for the RSPB in Abernethy and was for the creation of wetlands in the forest.

The main emphasis up until now has been upland paths and we have been lucky enough in having OATS doing an outstanding job in putting together two, five-year programmes of work, the first exclusively in the Cairngorms and the second as a joint venture with LLATNP. This fundraising has been invaluable, and the scale is something not seen before and not since, in fact it’s now just about non-existent to the effect that even during this period of extra heavy burden on the paths, virtually no significant works have gone out for a year.

This funding, and the trust shown to us by OATS in awarding us so many of their major contracts, enabled us to become the best hand-built path company out there and to gain a reputation for outstanding works that were sympathetic to this most precious landscape, and to be able to protect it from erosion as the numbers of users increased over the years it was a real labour of love.

All our work is done with the protection of the fragile landscape in mind, we are not construction workers, but conservation workers and we take this task very seriously. These paths are not built for the walkers – that’s a by-product – we build them to save the mountains. Everyone who comes to work for us is expected to buy into this ethos but that is never really an issue as the ones that make it past a few weeks, (those that can withstand the conditions, wind, rain, snow, being bogged down in wet peat and the extremely hard physical work, not to mention the midges!) stay and gain a huge love and respect for the environments we work in.  These people see it from a wholly different perspective once they are on their hands and knees and immersed in the work!

Only after seeing the before and after up close do you realise the importance of the work. Of course, hardly anyone ever does, as for most hill-goers, that may be their one and only time using the path and even they use it several times, once it has been built memories quickly fade of what the original erosion and problems were.

My advice for anyone wishing to get into this line of work, get a back-bone, there are no easy days just hard, hard graft, and as hard as you imagine it, it’s way worse. But every now and again you are rewarded by the most glorious views and sights and experiences and when a path is nearing completion and it all comes together, you step back, look at your work, and all those tough unrelenting days fade away.

The present funding and path management crisis, with the effect of COVID on top, has recently seen us change our business model away from path work to a certain degree and into tree work and arboriculture, it is hoped we can take the skills, commitment, and ability we have shown to work in the harshest conditions and terrains and offer our services there too.