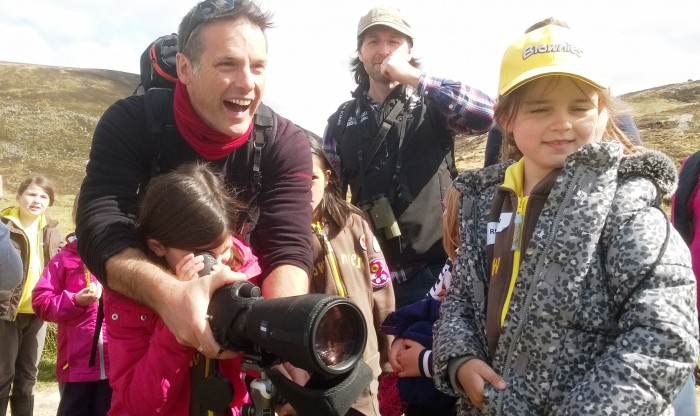 As I write the 2016 Cairngorms Nature Festival has just come to an end. Early indications are it was a success and has helped establish the event more firmly in the calendar.

In a packed programme there was something for almost everyone, with a strong emphasis on events for children. Rightly so; it is vital that we engage our young folk in the natural world that surrounds us.

Looking after it will be their responsibility one day.

The Festival is an excellent way to raise awareness across Scotland and beyond about the importance of the Cairngorms and the habitats, species and eco-systems that led to the establishment of the National Park.

It also encourages folk to visit us. This year’s Festival saw around half of those attending coming from outwith the Park; many of them stayed overnight in order to attend events, adding to the local economy.

For the first time over 1000 people joined in the events – up on the 850 last year – and all of those surveyed rated the Festival as ‘good’.

It is important to stress that the Festival is very much a partnership event, with a wide range of organisations joining together to arrange and deliver the various events across the Park.

Cairngorms Nature is the partnership established by the CNPA to deliver conservation on the ground and, importantly, to engage people in nature.

The focus of Cairngorms Nature is very much on landscape scale conservation, including woodland expansion, wetland enhancement and the conservation of capercaillie and raptors.

Like many others, I was deeply disappointed at the news of another goshawk being shot in Strathdon. This has once again highlighted the work that has to be done on raptor protection and I will be raising the issue with the new Cabinet Secretary as soon as I can.

But despite this set-back, much has been achieved, be it the 800 hectares of new native woodland planted or the 350 hectares of peatland that has been restored.

Last year around 2500 volunteer days were delivered through our Cairngorms Nature partners, emphasising the importance of people to the work of the partnership.

My son and I went along to Nick Baker’s brilliant talk on Bugs, held in Aboyne. The Naturalist, TV presenter and musician had spent the day on Deeside, on the Balmoral estate but had plenty of energy left to inspire and enthuse his audience with the lives of bees, wasps, spiders and other often over-looked creatures.

The hall was pretty well full with many children in the audience.

Another highlight was the BBC ‘Highlands; Scotland’s Wild Heart’ event at Boat of Garten,. I have spoken to a number of folk who were there and all said it was an outstanding evening with broadcaster Pennie Latin and film maker Nigel Pope.

So, with Ranger-led walks, a photography competition, an art competition for schools, opportunities to make mud-pies or look at the nature to be found in the high Cairngorms, a packed programme indeed.

On behalf of the CNPA I would like to thank everyone who helped pull the Festival programme together and deliver it over the weekend. It involved a great deal of work by our partners and our own staff; thank you all.

There is evidence it worked too. My son (age 4 and a bit) remarked on the morning after listening to Nick Baker that ladybirds bleed through their knees, which was just one of the more unusual observations Nick had shared with us.

We must inspire and engage the young folk; the natural world will be their responsibility one day – and of course let us all work together to ensure we leave it to them in the best possible state.