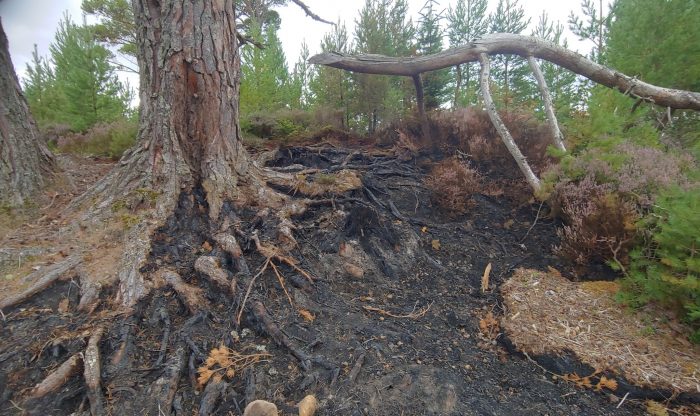 Most of you will have read about the recent wildfire at Glenmore – an area the size of seven football pitches burnt – which demonstrates the continued need for clear, direct messaging around fires, along with regular patrols by rangers and estate staff across the Park.

Quite simply, campfires should not be lit anywhere in the Cairngorms National Park and the utmost care should be taken when disposing of cigarettes or litter.

We take the issue of fires very seriously at the Park Authority, knowing the devastating impact that a large wildfire has on our wildlife, landscapes and communities, and potentially even the risk to human life. We are working with a variety of partners to try to reduce the risk of fires here, including the Scottish Fire & Rescue Service (SFRS), Police Scotland, local landowners, ranger services and other agencies. But ultimately, it relies on each and every one of us – those who live and work in the Park and its many visitors – to ensure we safeguard this stunning area.

Disposal BBQs which have not been extinguished properly, or have been used on soil rather than shingle, have been known to be the cause of several wildfires.

The CNPA has been working to reduce the likelihood of a disposable BBQ fire. Along with the Cairngorms Business Partnership, we have developed stickers and information leaflets to go out with disposable BBQ’s sold in shops in the Park. We hope that the retail sector will get fully on board with this and ensure every disposable BBQ sold, is done so with important safety information attached.  Indeed, I was heartened to read recently that the Co-op has taken the decision to ban the sale of disposal BBQs in its stores situated within, or close to National Parks right across the UK.

Advisory signage warning of a high fire risk is also important and we are working with land themanagers to ensure that signage is clear and obvious. The Park’s rangers – those employed by the CNPA, our volunteer rangers and those of partner organisations – are carrying out daily patrols, speaking to the public, particularly in key hotspots. Our rangers alone undertook 328 patrols between April and mid-May speaking with 2,362 visitors.

There is also a great deal of work being carried out by partner agencies and various interest groups, with country-wide campaigns around responsible behaviour when enjoying the outdoors. “Respecting the interests of others” and “caring for the environment” are corner stones of The Scottish Outdoor Access Code and falls to us all who enjoy getting out into the countryside.

I appreciate people like the idea of coming to the Park on holiday and toasting marshmallows round a campfire, but being able to have a campfire safely in the Park is rare – there’s just not many places where it is safe to do so. The Access Code states you should not light a fire in or near woodland or on peaty soil, which is most of the National Park! Sparks and heat can be retained for a long time in peaty soils and can travel underground for some distance so you might think you have put the fire out but it is actually still active. Plus, dense understorey areas of many woodlands and forests can be extremely dry – even after a shower of rain!

So please, don’t light fires or use disposable BBQs in the Park – use a stove instead.