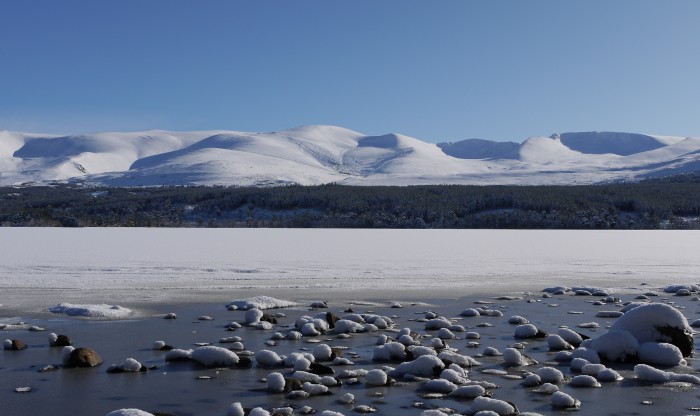 The extent to which the ‘Beast from the East’ is a ‘Blast from the Past’ has been the topic of conversation throughout the Cairngorms and indeed across Scotland over the past few days as we have enjoyed or endured (depending on your point of view) the first serious snowfall since 2010 – which in its turn was the first for a number of years.

The fact that such snow is a major topic for discussion and speculation is I think an acknowledgement of how the climate has changed over the past few decades. I well recall spending Hogmanay with some very dear friends in Carrbridge in 1978 or thereby; this was a time of Great Snow and considerable cold. My memory tells me it was down to -20  but since I was accommodated in a caravan for the duration of the stay, this could perhaps be an exaggeration. However it was seen as fairly normal winter conditions in those days.

What is no exaggeration is that since then the amount of snow and its duration has been on a steady downward trajectory, so that when storms such as ‘The Beast’ strike, they have a certain rarity value.

The weather and the climate is what has made the Cairngorms what they are and whilst we may grumble when the rain sets in for days at a time, without it the landscape would be very different. It was interesting to compare and contrast our mountains, landscapes and forests with those in the Oporto region of Portugal when attending last year’s Europarc Conference. Hotter and drier of course but much troubled by forest fires and lacking in the greenery and colour we value so much.

It is often said that European countries or Canada cope better with far worse winters than ours; schools stay open, traffic keeps moving and shops remain well stocked. But then they are geared for such winters, individually and collectively whereas for us, even in the Cairngorms, such relative extremes are infrequent; very few people routinely carry snow chains in their vehicles for instance, something that is mandatory in some parts of Europe.

And whilst some folk grumble about the snow, for others it is vital, particularly for the skiing sector, an important one for the Cairngorms. There can be no doubt that recent years have been extremely challenging for the operators; it is not an easy business to be in. It is to be hoped ‘The Beast’ has brought them some much needed business – and pleasure for those who relish hurtling down hill on narrow strips of wood or more modern materials I suppose.

It is the magic of the snow-covered hills, combined with the regular promotion of Cockbridge by the late Terry Wogan, that has helped the Snow Roads project move forward so positively. It is that magic which will, I believe, encourage people to enjoy the route and enjoy it by taking time, by stopping at places along the way, by marvelling at the scenery. I drive that way frequently and it never ceases to engender a sense of wonder, whatever the weather, whatever the light, in snow or when the heather is in full bloom.

Speaking of Radio 2, he said in a somewhat contrived link, I was listening to a brief debate last week about the planning application for a hydro scheme at Balmoral. Two ‘experts’ were having a tremendous argument about the merits of the proposal; I say ‘experts’ as it was somewhat evident that neither of them knew anything about the Park, about the planning system, hydro, conservation or Deeside.

The highlight for me was when one challenged the other about the impact the scheme may have on otters and the other argued (apparently in all seriousness) that if there were otters in that part of the river they ‘could be relocated’.

At which point I was moved to go out and have a snowball fight with myself.