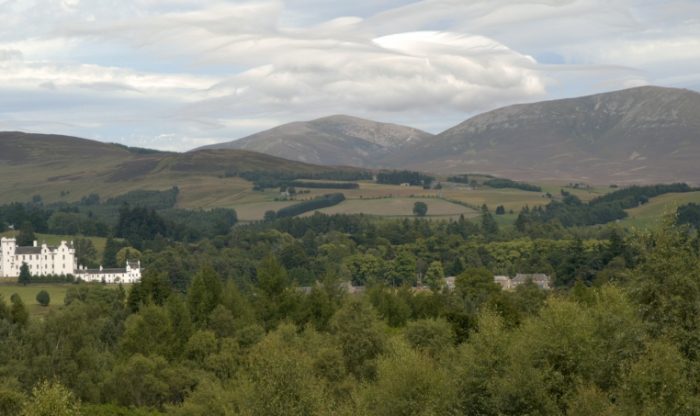 Blair Castle on Atholl Estates provides one of the most stunning entrances to a National Park and hosted the Cairngorms National Park Authority’s Spring Board meeting followed by a tour of the estate’s role as an energy generator.

Operations such as Atholl Estates are key enterprises in our rural communities. They are important providers of our tourism product, significant employers, drivers of species and habitat conservation, providers of affordable housing and deliver a range of public benefits.

Running such an operation is costly.  The cost of maintaining old buildings such as Blair Castle is no surprise, but add in looking after 153 miles of hill tracks, 97 bridges, numerous listed buildings and 260 houses let at affordable rents and one can quickly get a feel for the annual maintenance bill. To help meet this challenge, Atholl Estates embraced renewable energy in their strategic approach and importantly decided to embrace hydro as opposed to wind generation.

So hydro generation was the theme of the afternoon and the CNPA Board were shown two of the 6 schemes on the estate. The first was the “new” Castle scheme. The original castle scheme was constructed in 1908 to bring light to the castle and local businesses, but this was decommissioned in the 1950s when the national grid arrived. Then in 2014, utilising and repurposing the old infrastructure and buildings, along with a new 83KW Gilkes turbine, a new scheme was commissioned to address the sizeable energy cost of running the castle. The scheme has been a great success, not only meeting energy demand in the castle operation, but also generating income to support the castle’s upkeep.

The second was the sizeable 1.9MW Bruar scheme.  Located in a very remote area and subject to harsh conditions, this hydro project was constructed by June 2015.  Integrated with the existing Bruar catchment scheme, it feeds into Scottish & Southern Energy and generates enough power for around 1700 houses – about the whole of Pitlochry and Blair Atholl combined.  What is notable is the effort made to reduce the environmental footprint of the Bruar scheme. Firstly, no new track had to be constructed as an estate hill track already existed. Secondly, significant quantities of materials, much left from the original SSE works of last century, where repurposed and used from on and around the construction site. 20,000 tonnes of onsite crushed rock were used as pipeline bedding – saving the need for over 1000 large truck movements on the A9 and surrounding community, making obvious carbon savings.  Finally, to promote the best visual amenity possible, the estate decided to underground the power transmission cables which export the power to the national grid, costing the estate £500,000, roughly three times the cost of above ground pylons and wires.

A thoroughly fascinating day and a great opportunity for the CNPA board to learn more about how estates contribute to the National Park’s economy.  And to top it all off, on our arrival at the Bruar Scheme dam, we were welcomed by the marvellous sight of a male hen harrier, who was gracefully hunting the slopes.  Thank you to Sarah and Jamie and the team at Atholl Estates for a great day.

Douglas McAdam is a board member for the Cairngorms National Park Authority, he has spent the last 30 years in private commercial business at senior management and Board level across the aviation, utilities and land management sectors, both internationally and in the UK. From 2006 to 2017 he was CEO of Scottish Land & Estates and played a very active role across the land management, rural business and conservation sectors, with hands-on involvement in many industry groups and forums. He lives in Perthshire and owns and runs his own business operating in the tourism, consultancy and property sectors. Mr McAdam is also currently on the Board of Wild Scotland. Mr. McAdam is a Scottish Government Ministerial appointment to the CNPA Board last year.