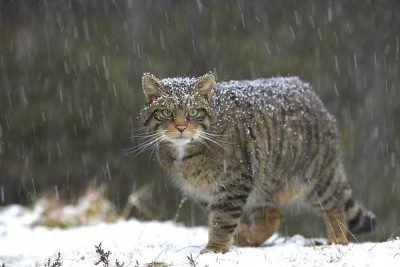 The Cairngorms National Park Authority is a partner in Scottish Wildcat Action – the Scottish Government backed project set up with the aim of restoring viable populations of Scottish Wildcats.

Scottish Wildcat Action has issued a statement in response to criticism of the initiative by Wildcat Haven who operate a conservation project based in the West Highlands.

Eileen Stuart, head of policy and advice at Scottish Natural Heritage (SNH), said: “We at Scottish Wildcat Action (SWA) are once again dismayed at the latest statement produced by Wildcat Haven on 12 April 2016. We have a Scottish Wildcat Conservation Action Plan which has been published and been developed by experts in their fields.

“Wildcat Haven’s actions misrepresent the progress we have made in the conservation of Scottish wildcat.  To be able to work with them, we need them to produce evidence and information relating to their activities‎.

“Our national project is supported by the International Union for the Conservation of Nature (IUCN) – contrary to Wildcat Haven’s claims. There are no credible alternatives offered by Wildcat Haven.

“Lethal control of feral cats conducted by gamekeepers and other land managers is a legal and legitimate method for managing feral cat populations.  The threats facing the wildcat (hybridisation, disease, accidental persecution) means we need to work with all interest groups to ensure the survival of the Scottish wildcat.

George Macdonald, of the Scottish Gamekeepers Association, added: “The gamekeepers who have chosen to give of their time to this project, working with the scientific teams to monitor trail cameras, do so because they have vital field skills and local site knowledge and are interested in saving the Scottish wildcat – nothing else. If gamekeepers or any other agents volunteering on the project under the appropriate licence are ever called on to dispatch obvious feral cats, it is done quickly, efficiently, and humanely.”