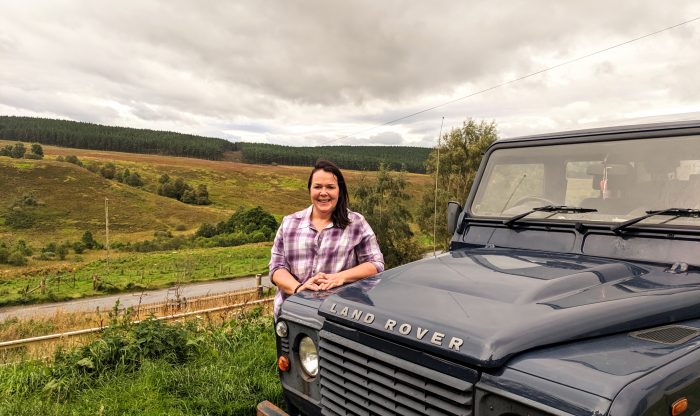 The winner of the Cairngorms Nature Farm award 2019 has been announced and this year it is Heather Rae from Ballinluig, near Grantown-on-Spey who has been selected from a shortlist of entries.

This special award rewards farmers or crofters who have made a substantial contribution to the natural environment around them. The award was judged by a panel of judges representing both Cairngorms Nature and the farming community.

Heather grew up in Inverness but wanted to take on the running of her grandmother and great uncle’s farms, which she eventually did at a young age. After visiting Ballinluig the judges were impressed with her high environmental and animal welfare standards. They were also impressed that Heather never takes the easy route if she doesn’t believe it is the right thing to do, all of the choices she makes are made with the habitats and species on the farm in mind.  She was recently advised to ‘spray off’ an entire field to treat some weed species, but being conscious of soil health and the negative impact that blanket spraying could have, she and a neighbour co-operated and invested in a weed wiper so that they could target certain species instead, leaving soil structure largely untouched and allowing natural processes to take place. Heather has also made a real effort to improve her species rich grasslands and woodland cover on the farm, as well as converting a holiday cottage which is currently used by a number of charities.

Lucy Ford, Cairngorms Nature Community Officer presented the award to Heather last week. She commented, “Heather is a worthy winner, her farm has been in Agri-Environment schemes continuously for nearly 20 years. She has undertaken multiple planting schemes on her holdings providing a future source of shelter for her farm animals and habitat connectivity.   Heather runs the farm, whilst bringing up three children on her own and she still manages to find the time of help and advise other farmers and crofters– a truly inspirational winner”

Heather received a plaque as recognition for her good work as well as a prize of Sunday lunch for 4 at Muckrach Hotel.