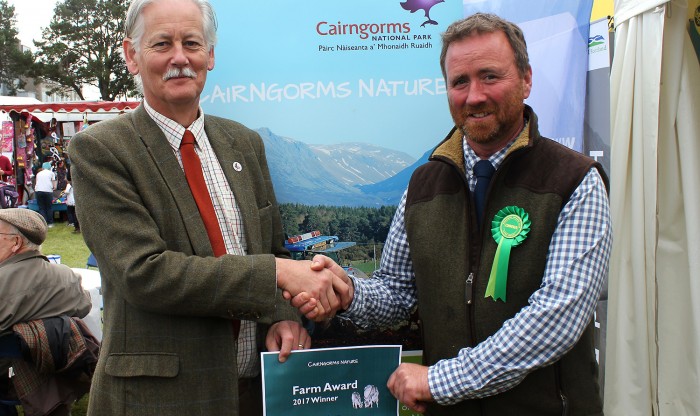 Malcolm Smith of Auchernack Farm, Grantown on Spey was announced as the winner of the 2017 Cairngorms Nature Farm Award at a special presentation at the Grantown Show today (10 August).

The Cairngorms Nature Farm Award was launched in 2015 to recognise and reward farmers and crofters from within the Cairngorms National Park who are making a substantial contribution to the natural environment, whether big or small. The winner is decided by a panel of judges representing both Cairngorms Nature and the farming community.

Malcolm was selected by the judges because of the brilliant work he has done with the Butterfly Conservation Trust to safeguard one of Cairngorms’ rarest species, the Dark Bordered Beauty moth. The farm is one of only three locations in Scotland for this species (all of which fall within the Cairngorms National Park) and careful management is crucial to maintaining the species at Auchernack.

Malcolm has also helped improve the health of his aspen stands, one of the most important tree species in the National Park. Through planting and careful grazing and fencing Auchernack Farm has allowed its aspen stands to naturally regenerate and provide a habitat for other species. The farm also supports a number of other rare and localised species; Kentish Glory, Northern Brown Argus and Narrow-bordered Bee Hawk-moth. Malcom has done all this conservation work alongside running a successful mixed farm.

CNPA Convener Peter Argyle, who presented the award, said “Malcolm is a great example of how working, commercially minded farms can still be real champions for even the smallest of species. The work being done at Auchernack and the results it is yielding goes to show that farming in the Cairngorms is essential to maintaining the living landscape we have in the National Park “

Malcolm received a plaque to display at the farm and also a voucher for Dinner Bed and Breakfast in the Cairngorm Hotel in Aviemore.