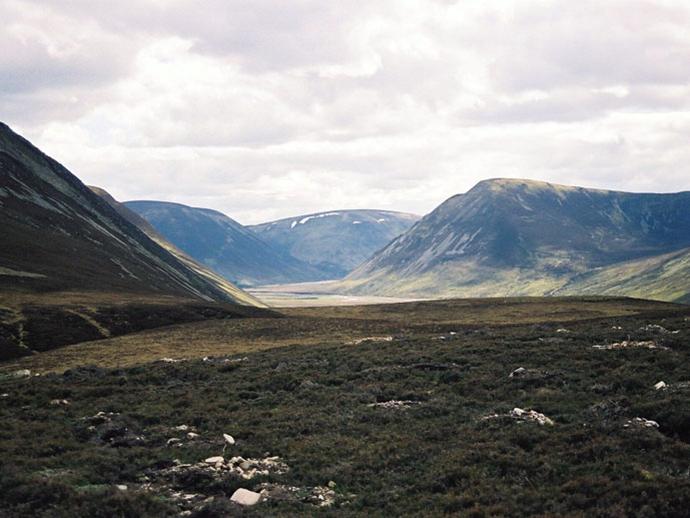 Long glens are frequent within the National Park, each emerging from the high mountains. They are steep-sided, with their slopes ending abruptly on a flat valley floor. Many are linked by spectacular upland passes, the most famous being Drumochter, The Lecht, Glenshee and the Lairig Ghru. Some glens contain remnants of Caledonian pinewood, and some are remote and uninhabited. In the latter case, the remains of long abandoned settlements, farms or shooting lodges are sometimes visible. Other glens, such as the Angus Glens, have been long-settled along their lower reaches. Here the valley floor is farmed, containing fields and livestock, the slopes often clothed with forestry plantations.

The main arteries of the Park are the wide straths. Forming natural transport corridors, they have provided access through the area from historic times until the present day. They possess large rivers which meander across the flat valley floor and the straths have been the centre of farming and settlement since prehistoric times. With their fields, crofts, farms and villages, they provide a sense of continuity and security amongst a landscape of hills and mountains. Their slopes contain pockets of native woodland, rough grazing, heather moor and plantation forest. Each strath is distinctive in its own way: wide Strathspey with its mountain backdrop, the narrower and more sinuous Strath Avon and Strathdon amongst gentler hills; and Royal Deeside with its characteristic pine forests and estates. The farm buildings often retain their stone-built, 19th century vernacular architecture, and are generally situated above the flood plains. Additionally, Victorian, granite shooting lodges are often associated with these glens and straths.

The Cairngorms National Park is home to some of the best known Scottish rivers, such as the Spey, Don and Dee. These emerge as small, tumbling burns in the high mountains and evolve into large, meandering rivers. They command the centre of the glens and straths, with wide channels, sinuous curves, shingle banks, riffles, pools and level flood plains. The journey upstream from strath to river source, through highland glen and upland burn to the snows of the corrie or plateau, encapsulates the diverse landscape qualities of the Park.

Lochs and lochans are not common in the Park, compared to their abundance further west, but where they occur they provide a sparkling contrast or a calm reflectivity. There are high corrie lochs, the highest water bodies in Britain, and linear lochs within glacially-sculpted glens. There are lochs nestling like jewels within dense forests of pine, and there are glistening lochs surrounded by lighter woods of birch.