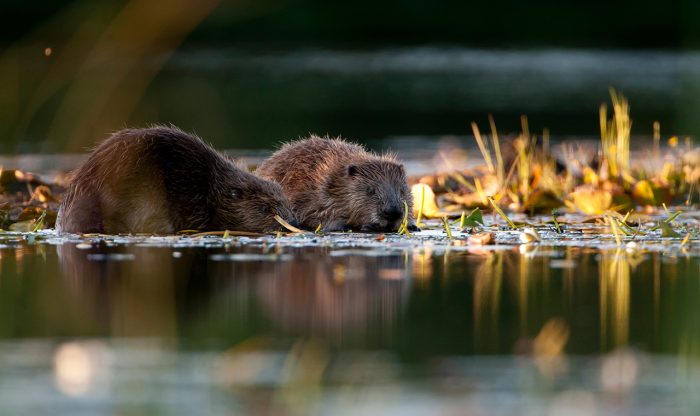 The Cairngorms National Park Authority (CNPA) has committed to taking a lead role in bringing Eurasian beavers to the Park, working with partners to restore a ‘lost’ species.

Eurasian beavers have European Protected Species status and the Scottish Government is supporting translocations as a proactive measure to establish beavers outside of their current range. As a result of this, the CNPA has been considering its role in bringing them to a suitable location in the Park.

At today’s (Friday 10th June) board meeting, a range of options were outlined to members in terms of the CNPA’s role in facilitating the Scottish Government policy to actively expand the beaver population in Scotland.

Members were asked to consider what level of involvement the CNPA should adopt regarding any potential project going forward. Following an in depth discussion, the board decided on a proactive approach, wishing to take on a lead role in the process, including managing the application, delivery, mitigation support and monitoring, working alongside a range of partners.

Recommending this approach to board members, the CNPA’s Head of Conservation, Dr Sarah Henshall said: “As an organisation we are well positioned to take a leadership role and have in place the Cairngorms Beaver group to provide input to this project. The Park Authority already undertakes a huge amount of conservation work throughout the Park and is therefore well placed to have the right conversations with land managers, communities and organisations as we develop this work.

“The role of the National Park Authority is to coordinate the management of the Park area and to ensure that the aims are collectively achieved. A reintroduction of a species to the Park is exactly the sort of issue the CNPA was created to lead on. We have an opportunity to deliver an exemplar approach here, bringing together organisations and individuals and joining up the conservation, land management, community, research and business interests.”

However, Dr Henshall did stress that the CNPA’s approach will be collaborative: “We will be doing work around supporting land managers and owners, as well as communities, over the coming year to be well informed and prepared for living with beaver, prior to any application being made to NatureScot.”

By the end of June, NatureScot will identify two or three priority strategic areas for beaver expansion in Scotland and – with partners – are establishing the governance structures, protocols, procedures, and consultation mechanisms to facilitate expansion. Modelling work is also being undertaken at a national level and ongoing work has identified the Spey catchment as one of the priority candidates for release, with approximately 7,000 ha of highly suitable habitat in the Spey catchment area.

Today’s meeting follows on from the publication in April of a CNPA commissioned study into the likelihood of the Cairngorms National Park being naturally colonised by Eurasian beaver and the potential benefits and implications.

The study focused on natural expansion from existing populations in the catchments of the River Tay and River Forth. Potential dispersal routes were identified in areas such as Loch Laggan, Loch Ericht and Loch Rannoch and the rivers Truim, Tilt, Garry and the headwaters of the Spey and Isla. The presence of physical barriers in these locations in the form of dams, hydro schemes and challenging terrain make it unlikely that beavers will make their way to the National Park naturally, at least in the short term.

Consideration was also given to whether the National Park has enough suitable habitat to support a population of beavers, as well as what the environmental and economic benefits and impacts might be. The study found that 30 per cent of watercourses in the National Park would be suitable for Eurasian beavers and the most appropriate habitat for beavers was the network of lochans and wetland environments in the Spey catchment.

Potential opportunities such as increasing the quality of freshwater habitat, natural flood management and the possibility of increased eco-tourism were noted in the report, as well as the potential risks, ranging from the impact on mature aspen stands to the likelihood of dam building and bank erosion, especially highlighting where this overlaps with agricultural and fisheries management interests.

Xander McDade, Convener of the CNPA board commented: “I fully support the recommended approach in terms of the Park Authority’s role in bringing beavers to the Cairngorms National Park. Beavers can bring wide ranging benefits to biodiversity and can play an important ecological role in terms of flood mitigation and habitat restoration, whilst also recognising the need for careful management of the species to mitigate impacts on other land uses and species.

“I think there is a real benefit to taking a leading role, allowing us to dictate the timings for translocations and the pace at which the process is rolled out, ensuring that the consultation is done properly with a whole catchment approach.”