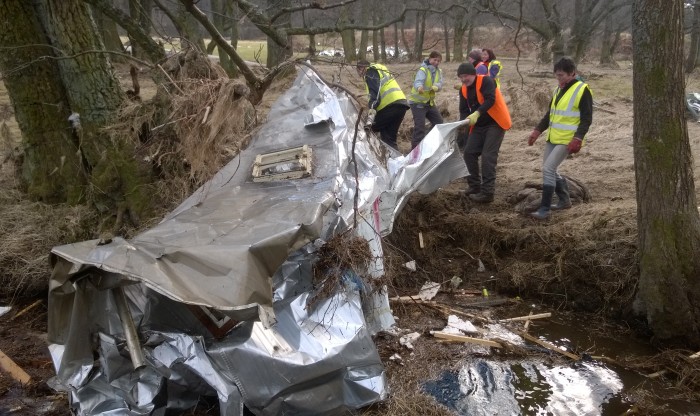 Punctuation often provides fertile ground for the ageing pedant. (Who remembers the unpunctuated panda who eats shoots and leaves?) I think this is a phase which one inevitably passes through en route to the ultimate status of Grumpy Old Man. There are occasions when my children would disagree believing that I have missed out that phase altogether!

You’ll notice that I ended that last sentence with an exclamation mark, mainly to emphasise the point I was trying to make. I stumbled across the John Beattie Programme on Radio Scotland the other day as I was driving home and it appears that someone of a similarly pedantic inclination has written a book complaining about the tired and over-used exclamation mark. Apparently some folk even end a sentence with a double exclamation mark. Imagine that?!! Beattie and his co-presenter went as far as to track down the author and interview him about the book.

The crux of the argument appeared to be that the exclamation mark should be used simply for that – an exclamation. The content of a sentence should be of sufficient interest and importance that it does not need to be emphasised by the use of an exclamation mark. If one is thought necessary then the sentence is probably not worth including in the first place.

It set me thinking about how often I end sentences and yes, even articles for the Deeside Piper, with an exclamation mark or two. Clearly this is something I need to remedy.

There are lots of interesting and important things going on around the National Park not least the continuing effort to clear up and repair the damage after the recent storms. As the access authority the CNPA has focussed on prioritising its resources on fixing paths, bridges and access routes. CNPA staff have also been spending time getting directly involve by spending a couple of days volunteering their time to some of the clear up projects.

Support is also being provided for local community and business groups to help them get ready for the coming season. With 43% of jobs across the Park dependent on tourism it is essential that a message goes out that we are again open for business.

Preparations are underway for this year’s Cairngorms Nature Festival which will be held on 14 and 15 May with many events planned for Deeside. James Miller, the Cairngorms Nature Young Presenter, visited the Park recently and together with Springwatch presenter Iolo Williams made a short film to inspire and encourage other young people to get outside and discover nature for themselves.

This is the Year of Innovation, Architecture and Design and the first Scenic Route in the Park, the Snow Road from Glenshee over the Lecht and into Speyside, is expected to be opened in the Autumn. The viewpoint at Corgarff is now complete and work on those at the Devil’s Elbow and the Tomintoul Quarry should begin in the Spring. These improvements will enhance what is already one of the most breath-taking routes in Scotland and encourage more people to enjoy the magnificent scenery of the Cairngorms.

So there is a lot of work going on and much to celebrate in the UK’s largest National Park. And not an exclamation mark in sight. So there!!