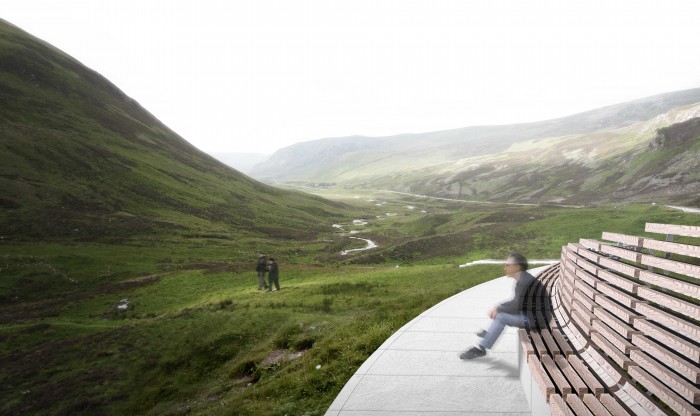 Somehow I couldn’t help feeling that I had just been handed a poisoned chalice. “The Convener suggested that you were the ideal person for this. You’ll enjoy it,” they said. “It will be easy. A nice day down in Glasgow, and anyway, most of the work has already been done for you.”

I had just been asked to join the panel of judges charged with the task of selecting the winning entries in the Scottish Scenic Routes competition. Young architects and designers had been invited to submit ideas for the development of various sites within the Cairngorms National Park’s boundaries. These were along the A93 and A939, routes which take visitors through Glenshee and over the Lecht, offering spectacular views across the open moorland and on to the distant mountains. The challenge was to create installations which would add further to these routes and provide interesting rest and viewing points. The project aims to encourage more people to drive the snow roads from Glenshee to Grantown-on-Spey, the highest public road in Britain, and promises to bring significant additional economic benefit to the area.

Three locations had been identified – the old Devil’s Elbow, the Corgarff viewpoint and the now disused quarry outside Tomintoul. Unofficial lay-bys had appeared at these sites and it was felt that the competition would provide opportunities to tidy them up while at the same time boosting tourism and rural employment. A solution had already been agreed for the Corgarff site earlier in the year and this was a second attempt to identify appropriate designs for the other two.

I met with the other judges at Glasgow’s Lighthouse Centre for Design and Architecture. We were a mixed group of architects and officials from across the country. We were guided by a Norwegian architect who had considerable experience of working on similar installations in his home country where the whole idea had originated. Much of the work had indeed been done and we were presented with a shortlist sifted from the original list of entries. That’s where the easy bit ended and our task began.

There’s nothing quite like public art for dividing opinion. I saw that clearly when the Corgarff proposal came before the CNPA Planning Committee for approval, it had to come round a second time before it was accepted. Here the same thing was happening among the judges, three hours had been set aside for judging, and four hours later we still had not agreed, so close was the competition. Standards were high and the concepts presented were so different.

Eventually we arrived at the winners – Daniel Smith and Philip Zoechbauer for the Devil’s Elbow and Angus Ritchie and Daniel Tyler (Processcraft) for the Tomintoul quarry site. The winners each receive £5000 and the support of the Construction Scotland Innovation Centre and a CNPA design team to develop their concepts further. Hopefully all three installations will be in place by Spring 2016.

Having got through the process and emerged unscathed I was feeling rather pleased with myself only to be brought down to earth by one of those who sent me there. “Remember there will be no escape. You’ll hear from those who live in the area and who pass the sites regularly!”
However I’m very relaxed about it all. I’m absolutely confident that everyone will agree that we made the correct decisions.

Is that a pig I see flying past the window?