Park goes live on Minecraft – now anyone can join in! 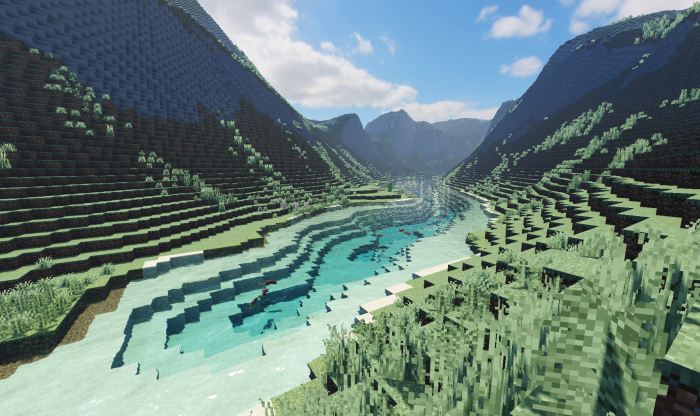 A few weeks ago, we told you that the Cairngorms National Park had been re-created in the popular game Minecraft. It has now been fully ‘road tested’ by members of the Cairngorms Youth Action Team and the good news is – from today – anyone can virtually immerse themselves in the Park, build their communities and fight off zombies!

Minecraft is a hugely popular game where players of all ages build, mine, battle mobs and explore ever changing landscapes. The game focuses on allowing players to explore, interact with, and modify a dynamically-generated or purposefully designed map made of one-cubic-metre-sized blocks.

Our Planning Manager Dan Harris had the idea of using Minecraft to encourage more young people to engage in the planning system. He re-created the Cairngorms National Park without its buildings in Minecraft using open data from Ordnance Survey and Forest and Land Scotland. The plan is now to share this innovative project with schools in the Park, giving pupils a fun introduction to the world of planning and policy making.

The scale of the Cairngorms National Park map is based on the movement range of a player on foot within the day/night cycle of the game: ten minutes for day and seven minutes for night, with both dusk and dawn lasting about 90 seconds. In effect, the player should be able to cover roughly the same ground in the game as they would in real life over the course of a day. This scaling down means that it brings everything closer together, making the map easier to explore and geographical features, such as the Cairngorm Plateau or Lairig Ghru much more recognisable.

So if you fancy having a go yourself – maybe you would like to build a castle on the summit of Cairngorm Mountain or a bowling alley at Balmoral – now’s your chance. Just beware of the Creepers! Go here to find out more!