By Duncan Bryden, CNPA Board Convener 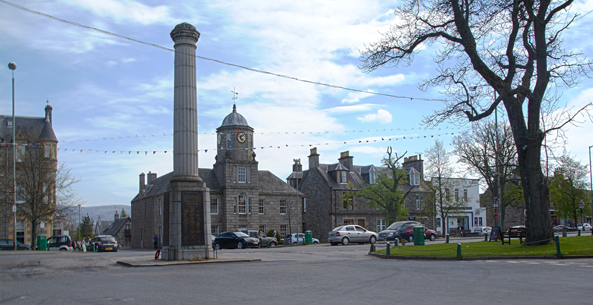 While driving past Kingussie I often look up towards the Minigaig Pass, a track high in the hills connecting Blair Atholl with Ruthven Barracks. For centuries before the A9 the Minigaig was the front door to the Strath and this wild remote spot, now only visited by a few hardy walkers, was busy with the noise of people and cattle – independent traders, soldiers and kings travelling to villages and farms in Badenoch and Strathspey.

The A9 has white lines, the Minigaig still has white quartz stones that mark the way and reminds us that amid the special wildlife and landscapes of the National Park the evidence that our forefathers used the entire area, even our wild places, is ever present and long established. In 1920, a sharp eyed hill walker picked up a Bronze Age sword above Corrie Cas and the flint arrow heads found by archaeologists on the plateau were perhaps dropped 5000 years ago by a Mesolithic hunter.

Today, just metres from the new Aviemore Primary school lies a 4000 year old ring cairn surrounded by modern houses. Since early Badenoch and Strathspey residents left their legacy in stone, many people who lived in castles and cottages, barracks and bothies continued to shape the heritage and culture we enjoy today.

We have some fine examples of 18th century stone legacies, still very much in use, that include the villages of Kingussie, Tomintoul and Grantown. James Grant, a weaver from Rothiemurchus, was the first occupant of the planned settlement of Grantown, occupying a building close to the CNPA office.

Celebrations are underway this week to mark the 250th anniversary of the town’s foundation. Bill Sadler and his team have done a great job in getting all the events together. This history gives the Square and High Street in Grantown special architectural interest and their character is protected by a Highland Council Conservation Area. Our rich built heritage adds colour and distinctiveness to small towns like Grantown and makes them that bit better to live in and visit.

Recently, I met some modern independent traders behind the Grantown Totally Locally effect – a grass roots initiative which aims ‘to do what it says on the tin’ – getting folk to spend their money locally. Perhaps they can help inspire the town’s Conservation Area status to become a focus for meeting Grantown’s changing needs. The CNPA Design Awards will be held again in 2016 to coincide with the Scottish year of Innovation Architecture and Design. The year of History and Heritage is to follow in 2017 and communities are encouraged to participate in both.

As stewards of what is now a National Park, while meeting our own needs, we all have a real responsibility to protect and improve both our nature and the cultural heritage of the places where we live and work. I hope future generations may look back kindly and still be enjoying our legacy to them in years to come.