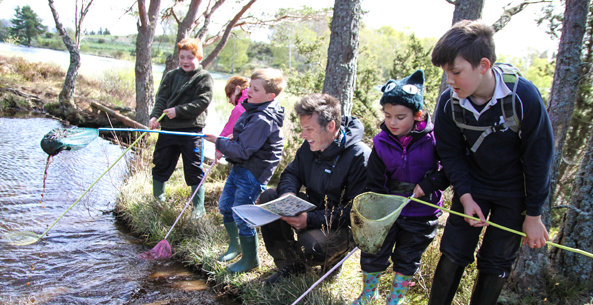 Weird is belly laughingly good. Well, that was certainly the reaction of those that gathered in Boat Hall recently to hear TV star naturalist Nick Baker headline the Cairngorm Nature Festival lecture. He reminded us to look closely because bizarre creatures are teaching us some important lessons.

Never mind your lions, elephants and giraffes – Nick’s tales of pursuing Pink Fairy Armadillos across the Argentinian pampas and how the five inch long little critters with their rosy coloured bums were so difficult to find, soon got folk chuckling loudly. And his film of the white Olms – once thought to be dragons offspring and depicted on Slovenian coins – that Nick found deep in karst caves, was almost unbelievable.

Next, Nick introduced us to the wonderfully ugly Hellbender Salamanders living under large boulders in the clear running water of Appalachian mountain streams, very similar to our Cairngorms burns. Unfortunately, Nick told us, all is not well with this giant primitive amphibian. Hellbenders – and I kid you not – are nicknamed snot otters and are suffering mysterious symptoms including deformed limbs, sores and shrinking testicles. This latter symptom in particular has ensured Appalachian mountain men and scientists are now much, much more interested in their well-being and finding out about the – as yet unknown – cause of these alarming effects.

While perhaps quite humorous (although not for the Hellbenders) this cautionary tale reminds us that our own health is closely entwined with the health of our natural world. Our declining populations of freshwater pearl mussels that filter all the water in the River Spey may become our own Hellbenders. We all know that the Spey provides much of our drinking water, underpins the whisky industry, angling and paddle sports, literally pumping tens of millions and many jobs into our economy.

After a highly entertaining and informative presentation Nick turned his attention to the National Park and Cairngorms Nature. We were, he said, privileged to live in such a great environment. And, if he could never again travel the world searching out important but overlooked natural oddities, Scotland and the Cairngorms would provide him with endless opportunities for study. Dotterel were top of his own list. He thought the Cairngorms National Park provided a place for landscape scale nature based projects, probably unrivalled in the UK.

Earlier in the day as part of the Cairngorms Nature Festival, Nick and his army of young local scientists had Bio Blitzed the margins of the Milton Loch in Boat of Garten. Perhaps their best find of the day was a Cairngorms contribution to weird creatures – a blood sucking, jawless lamprey. In close up, this local resident would easily find a place in most horror movies. Nick also reminded us one of the world’s longest animals – the 55 metre bootlace worm – can be found in Scotland. But don’t have nightmares, sadly both are pretty rare!