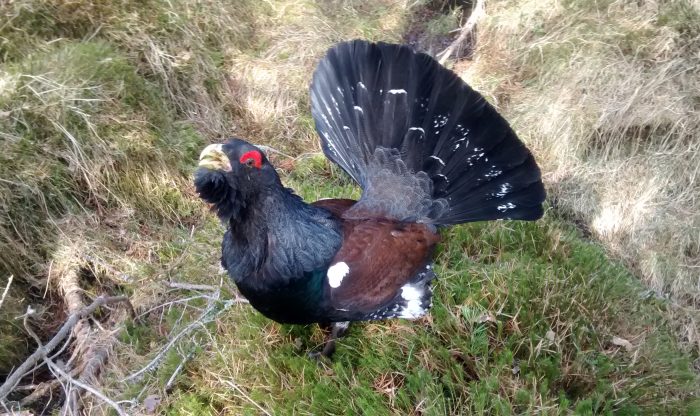 The capercaillie is often referred to as an ‘iconic’ species within the Cairngorms National Park; there can be no doubt this is one very impressive bird.

Cock birds have a wing span of up to 49 inches (or 125cm if you prefer) and weigh in at some 9lbs on average and their sheer size is emphasised by stunning plumage. It is not surprising that this species attracts so much attention and indeed, no little controversy.

Capercaillie are native to Scotland but had become extinct by 1785, principally due to major losses of its woodland habitat. They were re-introduced into Perthshire in 1837 and by the 1970s the population had risen to around 20,000.

From this healthy peak, the population has declined sharply, halving over the next 25 years. The Scottish population was recorded at 1,980 individuals in 2003-4 and now stands at around 1,100. There is much debate about the causes of this decline, with reasons cited including fences, predation, disturbance of nesting sites, changes in forestry practice and climate change.

Speyside and Deeside are hugely important areas for capercaillie; as the overwhelming majority of the Scottish population is found within the Park, we have a clear responsibility to do everything we can to conserve and grow capercaillie numbers.

It is against this background that the news of the award from the Heritage Lottery Fund for the Cairngorms Capercaillie Project is so hugely welcome. The HLF has committed £346,500 for the 18 month development phase of the project, with the possibility of a further £2.25m for the delivery phase.

I should add at this point that an enormous amount of work went into the application; a display of real determination and commitment by all those involved, both CNPA staff and colleagues in project partners.

A key element of the project, which seeks to provide improved habitat for capercaillie, is the involvement of the public. I am delighted that Carr-Bridge will be the pilot community, where everyone will have the opportunity to get involved with practical ideas to improve the habitat and contribute to developing a robust, viable population for the future generations. The support of the excellent community council has been – and will be – of paramount importance.

The CNPA, as I may have remarked before, has very few powers; we cannot just say ‘make it so’ for things to happen. We work with others to deliver for the park, its natural heritage, its people, businesses and visitors. This partnership approach was vital to earlier HLF bids; I am not sure how many people realise that over the past three years the HLF has invested almost £6m within the park through support for the Tomintoul & Glenlivet Landscape Partnership, The Mountains & The People Project and The Badenoch Great Place Scheme. Combined with other funding, the total project spend on these amounts to around £10m. If all goes as we hope, the Cairngorms Capercaillie Project will see another £4m invested in the Park supporting local jobs such as forestry contractors, rangers and gamekeepers.

By any standards this is tremendous achievement and a testament to the real commitment shown by many people within the Park and in partner agencies.

So whether you chose to call it a wood grouse, a horse of the woods, a capercaillie or, for formal occasions Tetrao urogallus, I hope you will get involved in this project, for it represents a real opportunity to ensure that our children and grandchildren will be able enjoy this spectacular bird on Speyside and Deeside.