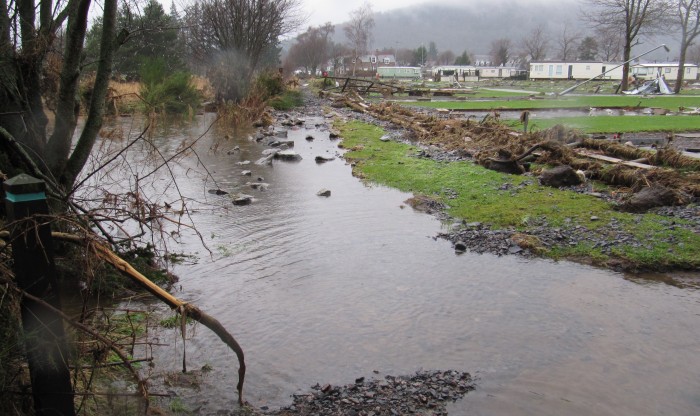 Along with many others, I was somewhat sceptical about the Met Office’s decision to name the various storms that reach our shores. After all, having an Atlantic and maritime climate, storms are a feature of our weather and events can happen at any time of the year. And then along came Storm Frank…

Within the Park, the greatest force of this unwelcome visitor was felt on Deeside and the impact and repercussions of the storm will be with us for many years to come.

The River Dee has changed, in a way that has graphically reminded us of the immense power that natural forces have at their disposal. In places the course of the river has shifted; a natural and continuous process that has seen the river change over the centuries and millennia but which on this occasion – within a couple of hours – carried away a section of the A93 and came within inches of destroying a 16th century castle, which only a month ago stood well over 30 metres from the river bank.

The impact on Ballater was immense and sudden. During the afternoon of 30th December the river was high and flooding appeared likely yet within a couple of hours there came a surge of water which swept across the golf course, poured into the streets and flooded houses and businesses. The flood level was five feet higher than the famous Muckle Spate of August 1829.

The caravan park took the full force of the swollen Dee. Run for the past few years as a very successful community business, it was a popular place for static and touring caravans. Many were swept down the river, into neighbouring streets or completely destroyed.

What has been most striking about this very real crisis is the way that the community responded to the emergency itself and in the days and weeks that have followed. Deesiders achieved a huge amount, supporting friends, neighbours and fellow residents, working together for the good of all.

The response by Aberdeenshire Council has been rightly praised. Staff dropped everything to help. The bridge at Invercauld was repaired and re-opened, the section of the A93 that had been swept away was replaced – land acquisition, design, planning and delivery of the new road – in only 16 days.

The CNPA’s role started with the recovery phase and there is much to be done. At a basic level, as the access authority, we are working to get a full picture of the destruction of the low ground path network that used to exist around the village. Pleasant riverside footpaths are simply not there anymore; nor are the banks upon which they ran. Footbridges have gone. Much thought will have to go into the repair or recreation of the network; it is an essential part of the village’s offering to tourists and visitors but there would be little to be gained in simply putting back what was, without careful consideration about the risks of future flooding.

The CNPA has a clear role in working with the community to address the social and economic impacts of the flood and we are committed to doing this.

We also need to give careful thought to what can be done to reduce the amount of run-off from the hills; the more rain water than can be held high in the river catchment the better – and this is true across the whole of the National Park.

Our award winning work on peatland restoration and our work on reforesting has been brought into sharper focus as a result of flooding events on both sides of the Park. Remember Aviemore and Kingussie were particularly badly hit in early December with heavy rains and melting snow? Emergency services had to rescue 25 people from a holiday park on the banks of the Spey in Aviemore and rail services were impacted because of an overflowing Gynack Burn in Kingussie.

Peatlands are vital, storing over 3 billion tonnes of carbon, but they can also reduce flood events by acting like big sponges. There are several peatland restoration projects across the Park including at the Invereshie & Inshriach National Nature Reserve near Kincraig.

So while the CNPA may not be there at the moment of crisis with the emergency services, we have a role post event. And, with the support of partners and Scottish Government, we can implement measures to reduce such events in future whether it’s peatlands or planting.