Our largest land mammal the majestic Red Deer is one of our most impressive wildlife spectacles in the Cairngorms National Park and an encounter with them is unforgettable. 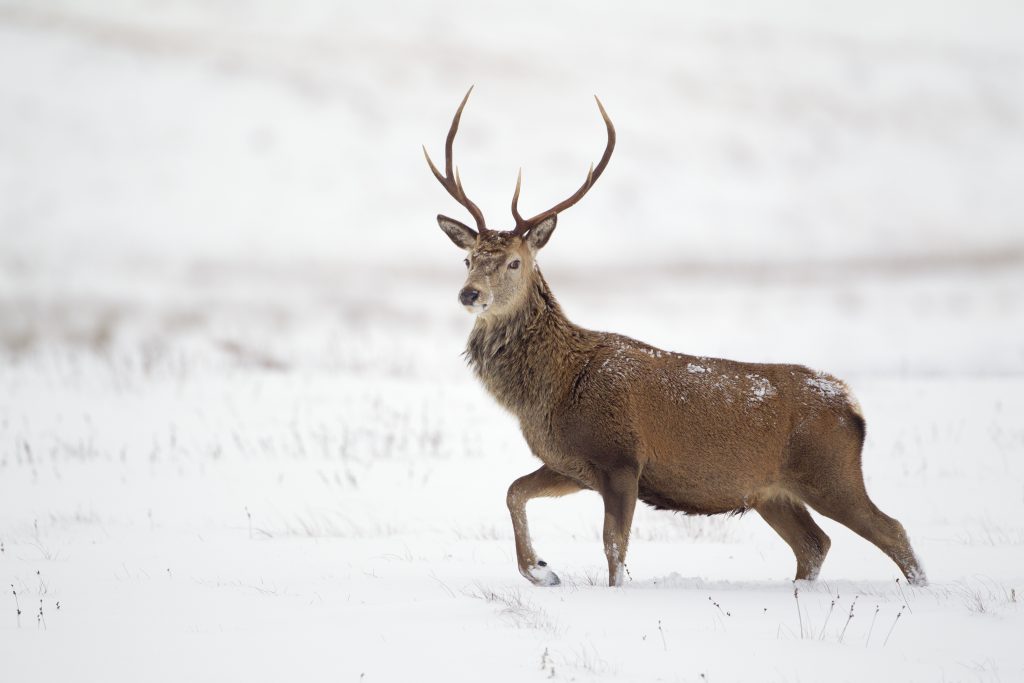 Grazing on grasses, sedges, heather and woody plants they can be found over a large swathe of the park from woodlands to moorland right up to the mountain tops. Woodland living red deer are generally bigger than hill deer due to the better quality feeding and shelter woodlands offer. Hill deer can live in large groups, sometimes consisting of hundreds of individuals, and with their dark russet brown coats with a paler buff rump they can be easily spotted on open ground.

Stags, the males, have large branching antlers, which increase in size as they get older and with quality food availability, a mature stag can weigh as much as 15kg. Stags and hinds (female red deer) are usually in separate herds, except during the autumn breeding season, known as the ‘rut’ when males bellow to proclaim their territory, fighting over females putting they antlers to good use during testosterone powered fights that can result in severe injuries.

One of the animal kingdom’s most spectacular phenomena takes place each autumn between September and November. During the rut, braver newcomers will challenge the current dominant stag for the control of the hinds with elaborate and noisy clashes of antlers and roaring which can be heard from quite some distance.

Fact 1 The rut is the best time to hear the stags roaring.

Fact 2 Autumn and Winter can be good for deer watching, since herds will seek lower grazing in bad weather.

Fact 3 If two males are evenly sized, they will sometimes lock antlers.

Fact 4 Red deer usually live in separate same-sex herds but during the rut they will mix to form massive groups.

Fact 5 Males will cover the coats and their antlers in mud during the rut to spread their scent.

Scotland supports the largest population of red deer in Europe and they are a huge asset to Scotland being an important part of our rural economy and culture, integral to Scotland’s biodiversity and a resource of healthy food and recreational activities.Red deer help to shape habitats through their grazing activities creating areas for seedling regeneration, providing a source of dung and carrion utilised by other species and maintaining rural communities. However too much grazing and trampling by deer can have negative impacts on important habitats and associated species.

In Scotland deer have no natural predators, populations are therefore managed to limit their impacts and to prevent road traffic accidents. Deer managers work together in one of several deer management groups in the national parks. Deer stalking in Scotland is thought to bring in more than £100 million annually to the economy and is an important land use in the park.

What you can do?

To see these impressive creatures for yourself in the wild one of the easiest places and your best chance is down Glen Muick, taking the minor road from Ballater.

Big herds can also be found in the uplands of Atholl estate and around the Ladder Hills, east of Glenlivet. If you plan on going looking for wild deer please be careful not to disturb any deer stalking activities.

Find out more about red deer- 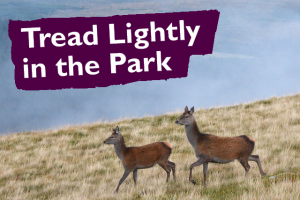 The high mountains of the Cairngorms National Park offer fantastic hillwalking, wild camping and mountain biking.  Please #TreadlightlyinthePark this autumn by using the Heading for the Scottish Hills service and follow local advice or signs on the paths and tracks to use to avoid disturbing stalking.

If you are keen to head off the main paths and worried about disturbing stalking then Sundays are the best days to head out into the hills.

Please be aware that hind stalking takes place from the 21st of October to the 15th of February and is crucial time of year for deer welfare and to bring numbers down to help protect the Parks rich flora so it is especially important at this time of year not to disturb stalking.