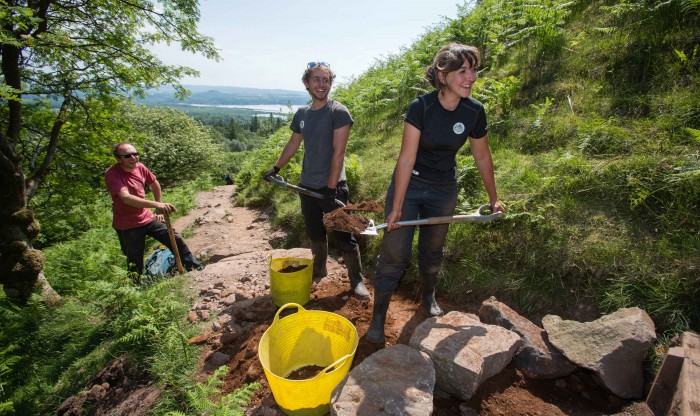 An exciting new campaign encouraging people to help look after Scotland’s most iconic and popular mountains, has been launched today on Conic Hill in Loch Lomond & The Trossachs National Park. The ‘Adopt a Path’ campaign is part of a major £6.1 million project – The Mountains & The People – and is launched on its one year anniversary.

‘Adopt a Path’ asks volunteers who go hillwalking to adopt a favourite hill route in Scotland’s National Parks – Loch Lomond & The Trossachs and Cairngorms – that they will inspect when they go walking and then report back on the condition of their adopted path. The aim is to create a whole army of volunteer path inspectors who will help spot damage on paths in the National Parks early, so that maintenance money and effort can be targeted and effective.

‘The Mountains & The People’ project represents the coming together of Scotland’s two National Parks to work on a scale never previously attempted. It is a partnership led by the Cairngorms Outdoor Access Trust (COAT) in conjunction with Loch Lomond & The Trossachs National Park Authority, Cairngorms National Park Authority, Scottish Natural Heritage, Forestry Commission Scotland and the Heritage Lottery Fund (HLF), which contributed £3.26m towards the project. The project brings together a mix of training, volunteering, education and contract work that helps truly connect people with the mountains in Scotland’s National Parks, whilst tackling the impacts of recreational access on our most iconic mountain paths. The work will improve over 125 km of paths whilst offering over 1000 days of volunteering opportunities and 36 paid traineeships, providing the opportunity to gain valuable skills and qualifications for work in the conservation sector.

Today’s launch saw the first cohort of trainees demonstrating their new path-work skills on Conic Hill, to representatives from each of the partner organisations behind the project. The trainees are taking part in a 6-month paid course to achieve their SVQ Level 2 in Environmental Conservation, spending time getting to know the different aspects of the course, meeting people working across the sector and most importantly getting to grips with the practical skills required to work in some of the country’s most challenging yet inspiring locations. The project will run a series of 6-month traineeships based in each National Park, training 36 people across this five year project.

Cabinet Secretary for Environment, Climate Change and Land Reform, Roseanna Cunningham said: “The ‘Adopt a Path’ campaign is an exciting opportunity for people to play a role as volunteer path inspectors on their favourite hillwalking routes in Scotland’s National Parks. We all care deeply about conserving our landscape, none more so than those who walk our hills and countryside regularly. The best way to conserve our mountains is to address these issues early. This is why we are enlisting the help of volunteers to spot any problems and concerns early so that we can all work together to help keep our paths open and safe. I would encourage all hillwalkers to adopt a path and help protect some of Scotland’s most iconic landscapes.”

Dougie Baird, Director of COAT said: “As part of the West Highland Way, Conic Hill is one of Scotland’s most popular walks and the ideal place to launch ‘Adopt a Path.’ The path up Conic Hill will be repaired and improved as part of The Mountains & the People Project. Once repairs are complete on, each of the mountain paths involved, we need people who walk those paths to help us keep an eye on them so we can make sure they are well maintained. The volunteers can also be trained to undertake minor maintenance on these adopted paths, helping to ensure that small problems are tackled quickly. Hiring people to inspect paths is expensive and cannot be done often, so it makes a huge difference if we can inspire volunteers who love the hills and walk regularly, to become custodians, adopting routes and keep us informed about the state of the paths.”

Gordon Watson, CEO of Loch Lomond and the Trossachs National Park said: “We are thrilled that so many people come to Scotland’s National Parks to enjoy the spectacular mountains and scenery. But all those walking boots, combined with Scottish weather, can have a significant impact on our most popular hills. As paths get worn and degrade walkers tend to go around damaged areas causing paths to widen over time and the surrounding environment is damaged. By restoring the paths, training a new generation of path conservation workers, and encouraging people to get involved in this project we want to make sure these mountains are here to enjoy for this generation and the next.”

Grant Moir, CEO of Cairngorms National Park said: “High quality mountain paths are incredibly important for the tourism economy and conservation of both Parks. The investment in iconic routes across both Parks will only strengthen that role. The partnership between the public agencies and third sector in delivering this multi-year programme will give a legacy that people across Scotland, and international visitors to these amazing National Parks, will enjoy for years to come.”

Stretching for 1,800 square kilometres with a stunning combination of lochs, mountains, forests and glens, Loch Lomond & The Trossachs National Park is among Scotland’s busiest countryside attracting four million visitors annually. Iconic Ben Lomond and The Cobbler are just two of the 23 mountains in Loch Lomond & The Trossachs that will benefit from the ambitious project.

Cairngorms National Park meanwhile boasts Britain’s highest and largest mountain range and at 4,528 sq km is the largest of all the UK’s 15 National Parks. Beinn A Ghlo, just off the A9 is one of the mountaineer must-dos that will see prolonged, sustained damage repaired using techniques pioneered by COAT during the now complete, four-year £2.1m Cairngorms Mountain Heritage Project.

COAT led the successful application for HLF funding and committed a further £612,177 to the project, which was matched by contributions from; Loch Lomond & The Trossachs National Park Authority (£525,000); Cairngorms National Park Authority (£275,000); Scottish Natural Heritage (£200,000) and Forestry Commission Scotland (£525,000) with the remainder coming from corporate sponsorship and charitable trusts, to give an overall total of £6.1m.

For further information on how to ‘Adopt a Path’ becoming or to get involved in conservation with ‘The Mountains & The People’ then get in touch via the website.