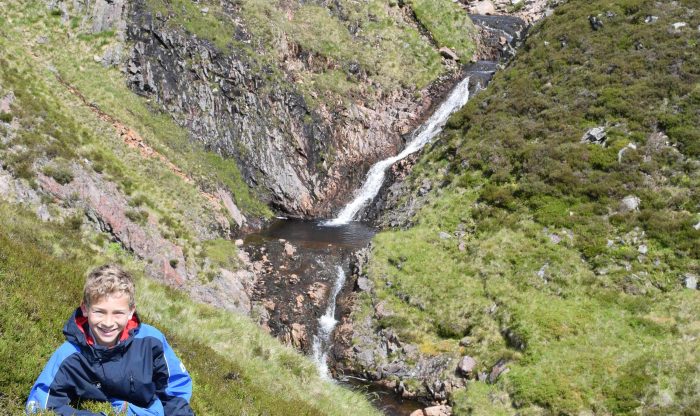 Lockdown was tough for most people but for nature it was the complete opposite. The lack of cars on the roads and boats in the water meant that there were fewer potential threats to wildlife and it was allowed to thrive. In some ways being at home was a good thing as more walking, cycling and just being outside in general took place because there was more time. Even just looking out of the window or sitting in the garden made people appreciate the animals and plants that could brighten their day.

I am very lucky as my “back garden” is the 29,000 hectare Mar Lodge Estate located in the Cairngorms National Park. Of course I wasn’t at school so I could do the work whenever I wanted to because it was online.  The weather was incredible for a Scottish summer and it would get dark at around nine thirty so that gave me endless hours outside,  just wandering around exploring parts of the estate I had never visited. On one particular excursion I came across a red deer antler. They cast their antlers (which they use like horns in the rutting season to fight with other stags and win females that they then breed with) around April and if you are aware of where the deer tend to be you have a good chance of finding them. Although they are rather hard to see so a lot of methodical searching is often necessary. Of course finding just one antler wasn’t enough 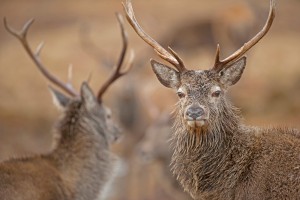 so from that day onwards, I would head out on my bike every evening to places on the estate where the deer liked to linger, and scour the area for antlers. After a couple of months an impressive hoard had been assembled.

One thing often leads to another.  The number of antlers I found per evening had started to decrease and so I cycled out to a far flung part of the estate to collect the final lot, I had just placed my bike off the track and was walking across a span of grass and rushes when a large bird of prey flew over my head. I have always been interested in birds and especially birds of prey so I squinted my eyes against the setting sun and tried to work out which species it was. It had a wing-span of around 1 ½ metres and a forked tale. Red kite! A red kite is a rare occurrence on Mar Lodge because of the persecution they faced in past years but slowly they have been creeping up Deeside. Also we were at an altitude of 400 metres so that made it even more surprising.  Adjacent to the area where we were looking for antlers was a plantation made up of mainly Scots pine with some Norway spruce and European larch and atop one of the spruce the red kite alighted and perched for several minutes. What made this sighting even more exciting was that it was breeding time of year. 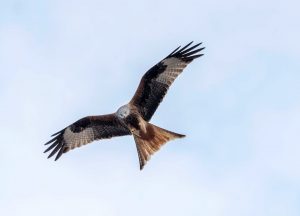 My dad and I returned the next day to walk through the plantation, hoping to stumble across a red kite nest. We were walking along a ride (the route that the forester would take to gain access to the centre of the plantation) when on the path we came across pluckings from a black grouse and a common gull. We were slightly puzzled because a Red Kite doesn’t typically eat birds of this size, it tends to feast on rodents and carrion. I glanced right and a shape in a tree caught my eye, it was a huge nest. Thinking we had found the red kite nest we rushed home to tell mum but after some research into what their nests actually look like we realised we had been wrong, it wasn’t a red kite nest.

We sent pictures of the nest and feathers we had found around it to a few different bird specialists that we know quite well and they all came back with the same response – Juvenile goshawk! This was equally or even more exciting than a red kite nest as goshawks are very elusive birds of prey,  this would also be the first record of breeding goshawks for years at Mar Lodge. We returned some weeks later to the nest site with Mick Marquis (under Schedule 1 licence) one of the most renowned goshawk experts, to see if they had been successful. Much to our dismay they had not reared any chicks and Mick believed this was because they were young birds, disappointing yet still great that they had attempted to breed.

These tales are probably hard to relate to for people who don’t have a huge piece of land to explore but it wasn’t just these sorts of experiences that were exciting, even in our garden species enjoyed great success. From my bedroom I watched a pair of stunning redstarts breed successfully and there were some heart-thumping moments as I witnessed a squirrel trying to pry open the nest box and a poor butterfly that didn’t quite evade the beak of the male.

Also there were robins, blue tits, house martins, another pair of redstarts and tawny owls that nested within 20 metres of the house. But just like that the chicks were up and gone, much like the way that lockdown ended for me. One minute I was only seeing my family for six months and the next I was back to school with eight hundred other people. Going back to school meant having much less time to explore and walk around. Everything moves on very quickly and people are forgetting their difficult lockdowns as quickly as they can, yet every cloud had a silver lining and remembering lockdown as a time spent with family and nature is just fine by me! 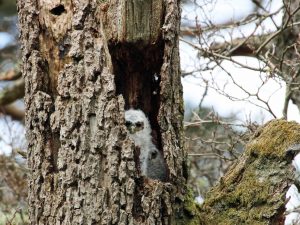