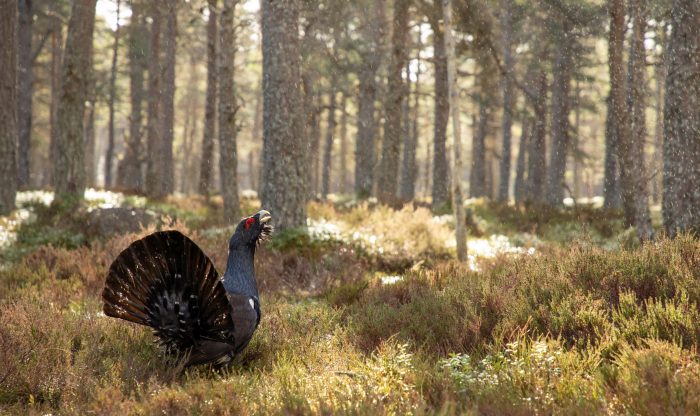 Of all the bird books and field guides lying around my house, the one that is most precious is not an heirloom, or expensive, or even the most comprehensive. It’s the one that was given to me by my friend, the wildlife guide and passionate birder, Mark Denman. The book is dotted with his notes on yellow post-its, testimony to both his knowledge and kindness, and he gave it to me five years ago. Our two families with young sons had been friends for some time and we knew that Mark was not only an exceptionally gifted violinist, but also a guide with a prodigious knowledge of butterflies and birds; in fact, birds were one of the major reasons he, Susan and the boys had moved up from London. When Mark discovered I was writing a novel set in the area and wanted to learn more about the birdlife, he kindly offered to take me round for a day.

That was in May, five years ago, and my husband, Alistair, and I set off with Mark for Loch Insh, where he trained his telescope on the osprey nest on the protected island just off the shore. As we watched the female perch protectively in her nest and the male lift off, showing the flash of white belly and underwing, Mark told us their astonishing story.

The birds winter in Senegal, West Africa, and every year the female returns first to the same nest. Other birds might fight for it, resulting in spectacular aerial battles, but once the victorious female is established, the next contest is for the winning mate. Her previous partner will arrive soon, but sometimes one or two other males will turn up and compete for her favour, all demonstrating their prowess through the delivery of fresh fish. It’s more than a romantic gesture, as osprey are the only birds of prey that almost exclusively hunt and eat fish, having sharp eyes that can spot them underwater, even in rain and mist, and reversible talons that help them grip.

Once the eggs have hatched, the female also fishes and by late summer, she takes off first on the journey back to Africa. A few weeks later, the male follows her and finally the chicks – usually one or two – make the journey alone, arriving in the same part of Senegal.

“We don’t know how they know the route or the destination,” Mark said, “and maybe it’s meant to be a mystery. Some things are beyond our understanding.”

Then he pointed out a pair of whooper swans on the water, who fly non-stop over one-and-a-half days to Iceland. He told us about the tiny willow warblers who come all the way from sub-Saharan Africa to bless our spring with their cascading song, and the field-loving oyster catchers, curlews, snipe and lapwing who winter on the coasts and spend summer on Insh Marshes.

My notes from that day include efforts to capture the bird calls. The common sandpiper goes ‘beep beep beep’ and ‘diddle iddle iddle’. Mark, with his perfect pitch, could imitate many of the calls precisely and in his post-its, he sometimes corrected the rendering in the book.

On to Loch Morlich, we watched the sand martins and swallows in their fast, skittish flight over the water; the first migrants back from Africa, they are the heralds of spring. On Cairngorm mountain above the loch, Mark pointed out the three iconic birds of the range: the snow bunting, that breeds in the Arctic circle; the ptarmigan, a brown grouse that turns pure white with the snow; and the dotterel, whose Gaelic name amadan-mòintich means “fool of the moors” perhaps because, despite historic persecution, it is uncommonly fearless of people. Mark’s post-it note reads, “Ridiculously tame! Walk towards you!”

At Broomhill Bridge, we watched the charming dipper, that bobs up and down on its river rock and walks right under the water in search of food. It was a joyous first sighting for us, and despite his life of bird-watching, Mark never lost the sense of pleasure these creatures bring, however common, nor his patience in sharing them with others.

After a heartening lunch in one of Grantown’s excellent cafes, he took us to some nearby woods. In the filtered sunlight of the giant Scots pines, standing among blaeberry bushes and moss, we listened to the fragmented chorus of bird song. Mark helped us see jays, wrens, tree creepers and the unusual crossbill, named for its beak that can pull the seeds out of pine cones. The forest was alive with finches, siskins and tits, including the exquisite crested tit, whose only home in the UK is the northern pine forests of Scotland.

These woods also harbour one of the Cairngorms’ most charismatic species, the capercaillie. The largest of the grouse family, this elusive bird is famous for its elaborate mating ritual, the lek, but is critically endangered. The caper were like a secret treasure to Mark, who’d searched for them many times, but only seen them after he’d moved to the area, as if the birds had demanded the utmost commitment before revealing themselves. To him, they were like surviving relics of the past, a final link to a lost landscape, and he felt enormous pride and privilege to have encountered them. Like other guides here who know the caper and their hidden territories – a kind of secretive priesthood – he called them by name. “Shall we go and see Arnie?”

Unsurprisingly, we did not see Arnie or any of his cohort that day and Mark would never have violated their nesting sites. May is peak breeding season, the most vulnerable time for the birds, whose decline is caused mainly by disturbance. If you want the capercaillie to survive, please be wise. Mark was fiercely protective of them and passionate in his work to help others appreciate wildlife without threatening it. Indeed, passion is a perfect word for Mark, who did nothing by halves.

In April four years ago, while guiding a Speyside Wildlife trip to Arizona, he was diagnosed with a brain tumour. The treatment and weakening down his left side meant he had to stop work immediately, and within weeks he could no longer play the violin. In April three years ago, the Denman family joined us for Easter Sunday lunch. By then, Mark was in a wheelchair, and though he shone for us that day with his usual stories and humour, we knew there were times of utter darkness. Over the two years of illness, his family endured the agony of seeing his body fail, his personality change and his brilliance drain away. Some things are beyond our understanding.

But there were shafts of light. His close guiding friend, Simon, took him on a longed-for birding trip to Costa Rica; Duncan and other friends joined Susan pushing him in his wheelchair in a mad dash up a forest track to catch sight of a rare bird. A Siberian Accentor, it almost never comes to the UK but Mark saw it. He also lived to witness the believer’s baptism of one of his sons in Loch Insh and afterwards told me he knew his own soul was in Christ. In April two years ago, he died. At his burial in the small graveyard beside Insh Church, the newly-returned osprey pair rose up and soared above us. It was a farewell and guard of honour; it spoke of Mark:

“in his riding
Of the rolling level underneath him steady air, and striding
High there, how he rung upon the rein of a wimpling wing
In his ecstasy!” The Windhover, Gerard Manley Hopkins

This April, two weeks ago, the osprey have returned again to Loch Insh and as I watch them in their wild beauty, the sunlight of Africa still in their wings, I know that somewhere in this mystery and glory, Mark lives.