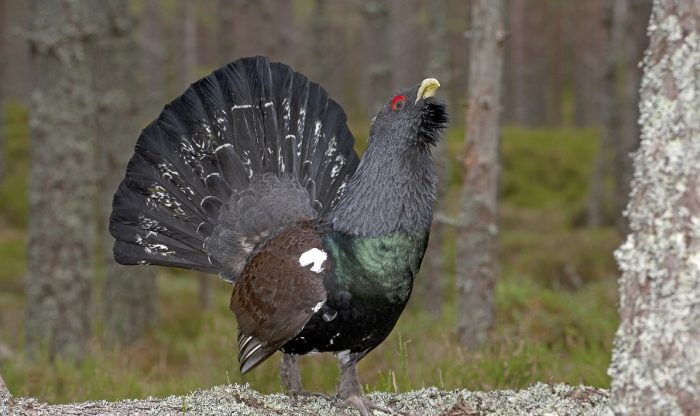 Official figures put the capercaillie population in Scotland at just 1,114 birds but people power and funding from The National Lottery is set to change all that over the next five years. The Heritage Lottery Fund has committed £346,500 for the 18 month development phase of the Cairngorms Capercaillie Project with a further £2.25million possible for the delivery phase.

The funding package overall – should the delivery phase get the go ahead – equates to an investment of around £4million in the Park economy with finance also coming from the lead partner – the Cairngorms National Park Authority (CNPA) – along with Scottish Natural Heritage (SNH), RSPB Scotland, Forestry Commission Scotland (FCS) and Forest Enterprise Scotland (FES), Cairngorms LEADER, the Game & Wildlife Conservation Trust (GWCT) and The Highland Council through the Scottish Landfill Communities Fund.

The Cairngorms Capercaillie Project is being hailed as an innovative and ambitious project which has the potential to save the species for future generations. The Cairngorms National Park has the last viable populations of the bird with the Badenoch & Strathspey area being particularly significant. With that in mind, the village of Carr-Bridge has been chosen as a pilot community where they will have a major say on key elements of the project, helping to work up practical ideas that can be tried and tested with successful initiatives being replicated throughout the National Park in the future.

The five year project will be focusing on two main areas; providing suitable, improved habitat for capercaillie and involving the public in the future survival of the species. Healthy habitats are extremely important with enhanced pine forests and better connectivity, but what will be key to the project’s success is how capercaillie and people can live together.

Peter Argyle, the CNPA’s Board Convener said: “This is absolutely fantastic news for capercaillie and for the Cairngorms National Park . The capercaillie will only survive in its stronghold if the people who live and work in the area want to protect and conserve their bird. Putting people at the heart of conservation is innovative and exciting and is exactly what this project is about. This project aims to inspire a love for capercaillie and central to its success will be the work done with communities to find practical ways for people to enjoy the woodlands alongside the birds.”

Environment Secretary Roseanna Cunningham commented: “The Heritage Lottery Fund’s decision to provide funding to the Cairngorms National Park could be the catalyst for the long-term preservation of one of Scotland’s best-known but most elusive animals. The Park Authority has some fantastic, ambitious plans in place for how they hope to help the bird to thrive in the area, and I particularly liked the initiative in enlisting the help of local residents, who arguably feel most passionate about protecting the capercaillie, given its intrinsic links to the Cairngorms area.”

Debbie Greene, SNH Operations Manager, said: “This innovative and exciting project is fantastic news for the future of capercaillie conservation. SNH works to connect people and nature in Scotland, and we are delighted that local people will have a central role in shaping the actions we take to conserve one of Scotland’s most treasured and recognisable birds.”

Carr-Bridge resident Frank Law added: “This is brilliant news for both Capercaillie and for our area. This funding is coming at a vital time for this wonderful bird whose UK stronghold is now in Strathspey. The work that we can now do as a community will make a huge difference, both in the way people value these birds and also to the practical management of the areas where they frequent. We are delighted to be able to continue and to expand the effort to give this bird a chance to thrive in our local forests.”

Previous to this announcement the amount of funding from the Heritage Lottery Fund invested in the Cairngorms National Park in the last three years was almost £6million for the Tomintoul & Glenlivet Landscape Partnership, The Mountains & The People Project and The Badenoch Great Place Scheme, with total project spend being almost £10million. All being well with the delivery phase of the Cairngorms Capercaillie Project there will be another £4million working hard to deliver benefits for people and conservation.