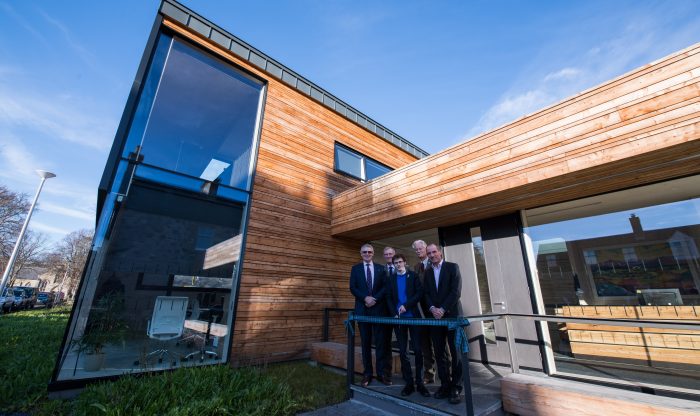 It was a case of ‘old meets new’ at the headquarters of the Cairngorms National Park Authority (CNPA) this morning at the official opening of the organisation’s new look offices in Grantown-on-Spey.

The organisation has occupied the traditional 19th century building in the town’s Square since the Park was set up some 15 years ago, but rather than look to move when the current premises became too small, it was decided to extend the offices and remain in Grantown.

Designed by Moxon Architects, the offices have been sympathetically extended to the rear featuring a modern new wing of flexible open plan office space and a bright new public facing entrance.

Newly elected Convener Xander McDade said: “It gives my predecessors and myself great pleasure to officially open the new extension. I think it looks fantastic and it certainly has improved the working environment for staff and is a much more welcoming space for visitors.”

The Park Authority offices are owned by Reidhaven Estate, who paid for the building works with the CNPA paying for interior finishings, furniture and equipment. Moxon Architects were commissioned to design and lead the project with local building firm AW Laing employed as the main contractor.

Ben Addy, Director at Moxon Architects said: “Our guiding principle was to create an innovative addition to the CNPA’s historic headquarters, offering an inviting new public entrance and offices for staff. The building finds a place within the townscape hierarchy suitable for the headquarters of the National Park, whilst the carefully selected materials will weather over time, setting the building into its context.”

Geoff Laing of A W Laing Ltd added: “As a local company employing local tradesmen, were delighted to be successful in being awarded this interesting, eco project designed by award winning Moxon Architects. We trust the National Park Authority employees and visitors will enjoy the new extension.”

On behalf of the Reidhaven Trust, David Greer said: “The CNPA are very good tenants and we are delighted to retain their presence in Grantown, at the centre of the Park and keeping a heart in the centre of Grantown. Moxon’s sympathetic design has ensured that the new building complements the old and gives a 21st century face to the CNPA’s centre of administration. We would also like to acknowledge the sterling contribution of A W Laing, local main contractor, whose diligence and attention to detail made the job a success.”

Following the official opening, members of the public were invited to take a look for themselves at the new extension with a ‘doors open’ event in the afternoon.