Grab your camans and hit The Shinty Trail 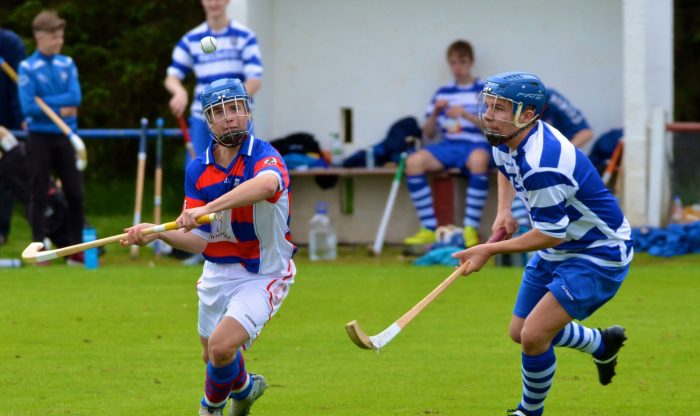 A new online resource celebrating shinty in the Cairngorms National Park and encouraging people to get out and explore cultural landmarks associated with the sport, has been launched today (20th October).

The Shinty Trail, developed by the Cairngorms National Park Authority (CNPA) with funding support from Bòrd na Gàidhlig, tells the story of shinty in Badenoch and its deep-rooted connections with other aspects of traditional Highland culture in the area.

In this corner of the Cairngorms National Park, shinty forms an integral part of the culture and heritage of the area, with early accounts of the game revealing that it has been played in the region for hundreds of years. In modern times, shinty is a fast-paced, highly competitive sport, where the game continues to be at the heart of communities throughout Badenoch and is a crucial part of the lives and identities of all those involved in the game.

The Shinty Trail also illustrates the strong ties which the Gaelic language has within the history of the sport. Gaelic song and verse was often composed about the game, where music and dance was also a crucial aspect of match-day activities in days gone by. At one time, a number of settlements along the length of the Spey had teams, where the area is also home to two of the most successful teams in the game through the neighbouring Newtonmore and Kingussie Camanachd Clubs.

With support from a variety of sources, Bruce MacDonald – the CNPA’s Gaelic Intern – has brought The Shinty Trail to life. He explained: “The Shinty Trail is an online, storytelling experience covering 30 key heritage sites, spanning from Laggan to Kincraig, where the aim is to convey the significance of the sport to the heritage and culture of Badenoch, as well as its deep-rooted relationship with many other aspects of traditional Highland culture, such as the Gaelic language.

“Over the course of this journey, the origins of shinty and the development of the modern game can be explored, as well as the history of key teams in the area, both past and present. There is also the opportunity to experience important aspects of Badenoch’s past, such as the Clan Macpherson, emigration, war, and early tourism.

“For visitors, the Trail directs them to some of the key heritage sites and resources in the area, where further information and experiences to engage with can then be found. For local residents, the Trail is a celebration of an ancient game which has been at the heart of communities throughout Badenoch going back centuries. And for those who are new to shinty, the story-map provides an insightful, visual guide into the history of the sport.

“I have thoroughly enjoyed researching and developing this resource, where there is much yet to be explored – hopefully this is something we can continue to build upon in future!”

The Shinty Trail will be the focus of an online event during the Badenoch Heritage Festival, which takes place online from the 26 – 30 October.

‘Gaels, Camas, Badenoch – the centre of the Shinty universe?’ takes place on Wednesday 28 October at 2pm with shinty historian and broadcaster Dr Hugh Dan MacLennan, who has also provided a great deal of help in the creation of The Shinty Trail. He will be taking a closer look at what this new resource has to offer.

Speaking ahead of the event, Hugh Dan said: “The Shinty Trail will be a great asset to the community of Badenoch where shinty is such an important part of life and the cultural heritage of the area. It will be a huge asset to schools and other people wanting to research the history of the game and its importance to people young and old.  It will offer visitors to the area and people from all over the world an insight into the wayward strands which come together on the field of play, but which are reflected in the environment and its rich store of place-names and other features. Hopefully the trail will be a living entity which can be added to and expanded over time as the story of shinty in Badenoch is a rich seam to be mining. As to whether the area is the centre of the shinty universe, I look forward to the debate.”

Dr Fiona MacLean, CNPA Board member and cultural heritage professional, lives in the area. She commented: “I would like to thank all those people and organisations who have been involved in the development of The Shinty Trail, to allow the CNPA to create such a fantastic resource which celebrates both the Gaelic and shinty heritage of Badenoch.”

High Life Highland’s Highland Folk Museum, which holds a comprehensive collection of objects and archival material that contribute to the history of shinty, along with colleagues at Am Baile, who hold a wealth of digitised images, have provided invaluable support and access to resources throughout the development of the Trail.

Helen Pickles, Project Officer (Shinty Memories and Material Culture) said: “It’s been a delight to collaborate with the CNPA to share local shinty stories with a wider audience. In addition to visitors to the area who are keen to find out more about this very Highland sport, this online resource will also be invaluable for the Badenoch Shinty Memories Group, who use shinty photos and stories to connect with shinty fans, young and old, who might be struggling in these particularly isolated times. The Shinty Trail is a fascinating and well researched insight into shinty in the area, and I’m sure will spark off many more conversations.”

For those who are keen to get out and about and physically see some of the sites highlighted on in The Shinty Trail, the Boleskine Shinty Pavilion – located at the Highland Folk Museum – is open until the end of October (booking is essential).

The Shinty Trail can be viewed in English and Gaelic.