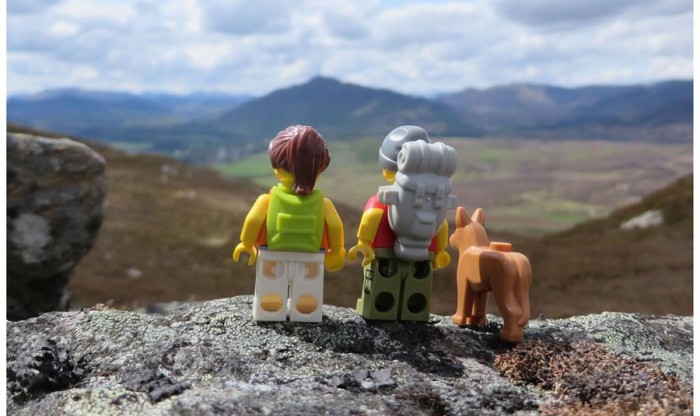 If anyone ever tells you that angling is a great way of relaxing and de-stressing don’t believe them!  I’ve been standing at the side of a wee lochan in Glen Muick for three hours now.  It’s well stocked with rainbow trout which are surfacing all over the place but none has shown any interest in eating anything I’ve dangled in the water so far.  Yes it’s great to be out in the fresh air and close to nature.  This is a beautiful place and I’m enjoying the solitude and time for reflection and all that but I can feel my stress levels rising.

Since I arrived everything seems to have gone wrong.  I took out my rod to find that one of the rings was bent and had to be fixed.  I then found that the line was tangled and I had to dismantle the reel to release it.  When I eventually got going the fish showed no inclination to co-operate at all.  There’s a lot of reed around and any fly that I let sink to where I thought the fish might be lying immediately became snagged in the underwater vegetation and had to be hauled back out at the risk of snapping my line.

Having had no success I thought I should try a different fly, perhaps one that floated on the surface avoiding the weed.  I have a few dozen flies but I recently inherited a friend’s fishing tackle which includes literally hundreds of flies.  Rather than giving me more options, that has just confused me further!  I eventually selected what I thought would be a winner.  It was made up of two white polystyrene balls with eyes painted on them and a yellow tail flowing from behind.  It’s called a “Booby”.  I’ll leave the reason to your imagination.  I read somewhere that fish found them irresistible.  Irresistible?  They loved it! They came from all over the place to play with it.  They pushed at it and pulled it.  One even grabbed the tail and pulled it under before releasing it and letting it float away again.

Maybe I should take up walking instead.  The Cairngorms National Park Authority is organising a Wee Walks Week next month 16 – 23 September.  That sounds like just the thing for me.

Now what else could possibly go wrong?  Ah yes.  What have I done with my car keys?

Maybe I’ll be going for a wee walk sooner than expected!