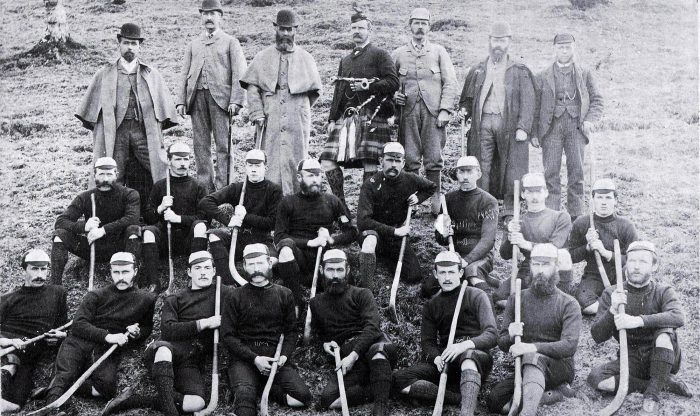 The Badenoch Heritage Festival – or Fèis Dualchais Bàideanach in Gaelic – has been taking place online this week, after being forced into the virtual world along with almost every other event in 2020 due to Covid-19. I hope some of you have been able to tune in, from the comfort of home, to some of the really interesting content that has been available.

I particularly enjoyed – and chaired – Wednesday’s offering, ‘Gaels, Camans, Badenoch: the centre of the Shinty universe’ with broadcaster and shinty historian Hugh Dan McLennan. This was a brilliant session around the cultural and historical connections between the sport of shinty, particularly in the Badenoch area, and the Gaelic language.

The Shinty Trail covers 30 key heritage sites, spanning from Laggan to Kincraig giving users the opportunity to experience important aspects of Badenoch’s rich cultural past, such as stories about clans, emigration, war, and early tourism, and specifically relating to the shinty-heritage of Badenoch. And if you can’t get out and about to the various places of interest in person, our unique Highland culture is still brought to life on The Shinty Trail with images, videos and stories, providing a glimpse into the area’s heritage, both past and present.

In this corner of the Park where I live, shinty forms an integral part of the culture and heritage, having been played here for hundreds of years, and continues to be at the heart of communities throughout Badenoch. Shinty also has strong associations with the Gaelic language, with Gaelic song and verse having often been composed about the game. The Gaelic name for shinty is ‘Camanachd’ and is very much considered the national game of the Gàidhealtachd.

Badenoch is renowned for the richness of its cultural heritage, which is showcased in ‘Badenoch: The Storylands’, a new initiative developed by the Badenoch Great Place Project, which has been funded by the National Lottery Heritage Fund. The heritage of the people and place is recounted through stories, positioning Badenoch as a heritage tourism destination, which is capitalising on its rich cultural heritage. Involving a number of partners, the project has offered volunteering and training opportunities, new research into the area’s past and historic landscapes, the creation of new interpretive routes and mobile apps aimed at visitors, as well as the development of new promotional and exhibition materials.

Badenoch is an ancient historic region that has roots tracing back to Prehistory and Pictish times and was one of the centres of Highland Gaelic culture in the Cairngorms. It is this link between culture and place which fascinates me: the impact of people on the landscape and the stories and songs which remind of the strong ties between people and place. Our communities in the Park are separated by the Cairngorm mountains, which means that over hundreds and thousands of years, the different areas of the Park have developed their own distinct identity and cultural traditions while sharing deep connections to the same environments. ‘Badenoch: The Storylands’ offers a fascinating insight in to that relationship, taking us on a journey from the past to the present, in the wonderful setting of the Cairngorms.