Walking to Health: Latest blog from Cairngorms Writer in Residence 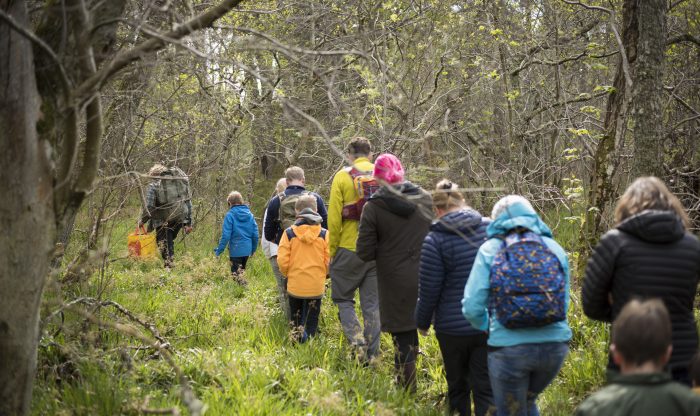 It was quiet when I arrived at the edge of Anagach woods, sunlight filtering down through giant trees, a soft breeze shifting the leaves. Gradually, people began to appear, some striding purposefully down the track, others making their way slowly with two sticks. Most were retirement age, all were local folk who gather every week for the Grantown Health Walk, one of about 16 that take place in locations across the Cairngorms National Park. Health Walks are short, safe, social, local, low level and guided by a trained leader, all intended to help people be more active and connected, to one-another as well as nature. I was there to bring another dimension to their outing through the Shared Stories project by inviting creative responses to the natural world.

The Grantown group is large and splits into two strands, determined by pace. The first week I went with the slow walk, who were happy to stop every now and then to focus on a sense, breathing in the woodsy smells or inspecting the patterns of bark. These women wait for one another and share time with a wide embrace.

The second week I joined what walk leader, David, calls ‘The Grantown SAS’. In keeping with his military background, he sets a brisk pace and the dozen or more walkers revel in the energy and the many routes he has found. I didn’t ask them to stop and meditate on the aromas, but took the opportunity – while puffing alongside – to hear their experiences of the outdoors. Most of them spoke of childhoods unfettered by adult supervision with whole days spent roaming, scrambling, fishing and foraging.

Back in the Royal British Legion where they always finish with coffee and biscuits, I introduced the Cairngorms Lyric and offered conversation starter cards: “Where in the Park do you feel most at one with nature?”  “What is your favourite wildlife of the Park?”  “Talk about someone who has helped you appreciate the outdoors.”

At that last one, David and his wife looked at each other. “I was afraid of heights,” Beata said, “and couldn’t go up a hill. He gradually got me there.” It started with small slopes and she always had to go down backwards, unable to face the view down, but finally, on the third attempt, she made it to the top of Meall a Bhuachaille and hasn’t looked back.

“Now don’t write too many good things about the Park,” one man warned. “We’ve got enough tourists as it is!” The conversation traversed the familiar contested territory of what the Park is for. I suggested expressing it in poetry. Smiles and raised eyebrows, but on my second week at Grantown, a woman shyly gave me a Cairngorms Lyric and another emailed me several, set into her photos of the Health Walks.

With the Aviemore group, we explored the low slopes beyond Badaguish where the broom was massed with gold and Scots pine regenerating. They showed me the remains of the old crofting township of Beglan, now just overgrown stones in broken rectangles. Some in that group have walked all the Cairngorms and remember ski-ing in the early days. One gentleman persuaded me to get down cheek to cheek with a tiny burn to video its splash and song.

The following week we walked in the cool damp of Glenmore forest, where we talked about overcoming the fear of swimming. One woman was recovering from a hip operation and another was 93 and deaf. It rained, but she kept smiling.

In Kingussie, the group is more mixed. The retirees are joined by folk from Caberfeidh Horizons, a social enterprise for adults with a learning disability, mental health issues, addiction problems or long term unemployed. On my first day with them, we walked up the river Gynack, following its route through stone pools and gorges, pausing on a bridge to listen to its many notes. Resting under trees, we identified birdsong and all the colours of green.

The next week took us past the community allotments, across fields strewn with wildflowers and under giant beeches. In the café afterwards, we used the conversation cards and heard stories of getting lost in the mountains and finding friendship with a horse. I shared my poems built from the words they had come up with the week before, and one of the walkers gave me his own Cairngorms Lyric. The feeling amongst these folk was gentle and supportive, a place of acceptance and quiet joy together, both in the beautiful outdoors and the welcome of a café.

In September I will be joining another Health Walk Group in the Park and sharing at a training day for the Health Walk leaders, all volunteers who give generously of their time and care to make these walks possible. It has been a gift for me to come alongside these groups and to witness how good it is when nature, walking and a therapeutic community come together.

“Everybody needs beauty as well as bread, places to play in and pray in, where nature may heal and give strength to body and soul.”  John Muir